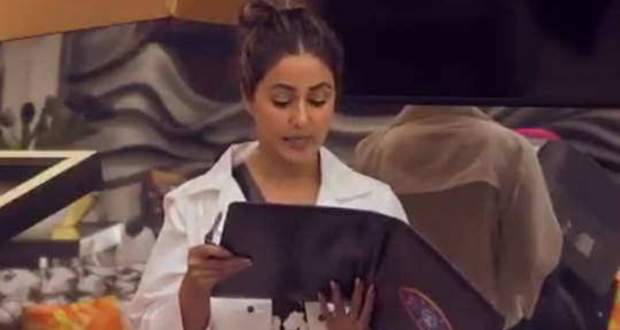 Today's Bigg Boss 14 5 Oct 2020 episode starts with Gauahar Khan telling the freshers to ask for approval for using the gym.

Meanwhile, Biss Boss contestants Heena Khan and Jasmine Bhasin discuss Nikki Tamboli about her behavior in a negative manner. While Shehzad Deol was giving advice to Nikki to talk nicely to people or her work will not be recognized by others.

At the same time, BB14 contestants Sara Gurpal called Sidharth Shukla as Jija of Punjab and Sidharth asked her for the reason. Jasmine advised Sara to not talk too much to Sidharth as he is a senior.

Later, BB 14 senior Gauahar ordered Abhinav Shukla to serve the food as he knows how to distribute the food equally to everyone.

Now, Heena reads from the rule book about the first task named 'entry pass'. The Big Boss rejected members got a chance to prove themselves by completing some tasks given to them by seniors.

BigBoss contestant Sara had to cut her hair which she also agreed upon. Jaan Kumar Sanu had to lift a weight of 5 kg with one hand which he also accepted and completed.

They further had 2nd round of other tasks as well.

At last, Bigg-Boss announced that the rejected four had to make a decision on which one person will stay in the garden and the rest will be inside the house. Rubina is the one to stay in the garden while others are allowed to go inside.

Big-Boss senior Sidharth then shared a bed with Jaan as there were no empty beds.

On Bigg Boss Day 3 morning, Jasmine and Rubina had an argument regarding the 7 essentials to be brought from the mall today.

Sara and Nikki also had a heated argument concerning Nikki asking for 1 pair of heels as an essential item. Later, they resolved it themselves.

Upcoming BiggBoss 14 episode update: Deciding on what essential items will be chosen for the day.