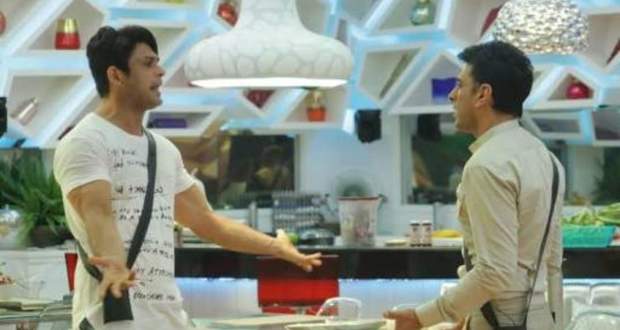 Today's Bigg Boss 14 6 Oct 2020 (day 3) episode starts with Eijaz Khan asking Gauahar Khan to change his duty of doing dishes for just one time rather than 2 times a day.

Big Boss 14 senior Gauhar Khan orders every fresher to clean their own dishes and cups while Shehzad Deol volunteers to help Eijaz to do the dishes.

Now for the Bigg Boss 14 nomination week, Bigg Boss revealed that everyone is nominated for elimination.

Pavitra Punia is called into the confession room to get the rule book. She announces to everyone in the house that there is a tasked named 'Jewel Thief' in which the fresher who has the most jewels can avoid the nomination.

During the BiggBoss task, Gauahar and Sidharth Shukla get into an argument about how the task should be done.

Eijaz Khan rebukes Sidharth for not giving the boys a chance to compete in the task and not doing the task in the correct way.

All the boys of the Bigg-Boss 14 house make a plan to give their jewels to one boy so that girls can not win. Rahul Vaidya does not agree with the boys' plan. He then gives the jewellery back to Gauahar to give it to anyone whom she deems worthy.

At night, the BigBoss announces Abhinav Shukla as the winner of the 'Jewel Thief' task as he has more than twenty jewellery items.

Later, while doing the dishes, Eijaz gets hurt due to broken glass.

Meanwhile, Jasmine Bhasin gets emotional as she does not know how to wash her clothes while Abhinav, Rubina Dilaik and Sara Gurpal have a laugh about it.

At the same time, in the bedroom, Sidharth flirts with Nikki Tamboli and she calls him 'Husband Material' while Gauahar and Jasmine tease him about it.

Upcoming BiggBoss 14 episode update: Abhinav has a chance to get Rubina into the house but if he does that he will get nominated.