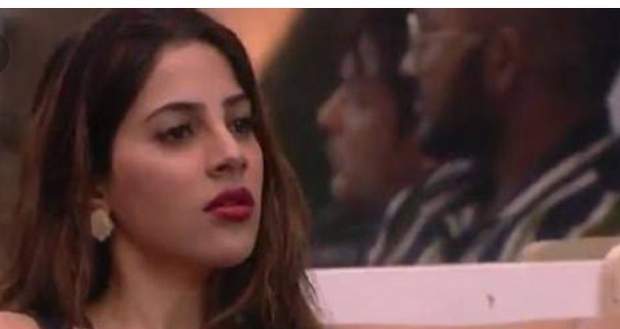 In round three Bigg Boss task, the girl who will have the most liquid in glass on the tray will be the winner. Shehzad Deol tips over Nikki Tamboli's tray, Nikki tips over Pavitra Punia's tray, and lastly, Pavitra tips over Jasmin Bhasin's tray.

Bigg Boss 14 senior Sidharth rebukes Shehzad by saying that he is not true to his words that he told the seniors at the beginning of the season.

Bigg Boss tells Sidharth to announce the name of the Bigg Boss 14 task winner and Sidharth announces that Nikki is the winner of the task as she was outdone by other BB14 contestants.

Rubina says that Sidharth has made the decision with his own preference.

On Bigg Boss 14 Day 5, Rubina and Eijaz Khan were already awake while others wake up to the song 'Chokra Jawaan Re'.

Rahul Vaidya and Jaan Kumar Sanu argue over the quantity of food to be taken and they also curse at each other.

On Poocho Seniors Se Sawaal, Heena Khan is asked that who is the strongest contestant in BB 14 and she answers that it is too early to give anyone the title of strongest Big Boss 14 contestant but she likes Pavitra and Nikki's game as they are putting efforts into the tasks they are given.

The seven essentials of the day are decided and everyone in BiggBoss house gives Nikki a standing ovation as she does not want to get anything.

Rubina and Jasmin converse with each other that Bigg Boss is trying to break them by not giving them basic necessities. Bigg Boss announces that It is their actions only that led them to the situation they are in.

Bigg-Boss gives Rubina a chance to get into the BigBoss house if she does not participate in the next immunity task and gets nominated for Bigg Boss elimination. She accepts BiggBoss  offer.

Pavitra and Rahul get into a verbal fight as Rahul did not do his duty of cleaning the bathroom.

Upcoming Big-Boss 14 episode update: Freshers to ruin Nikki Tamboli's make up in the next immunity task

Let's see what next in the future episodes of Bigg Boss 14 reality show.