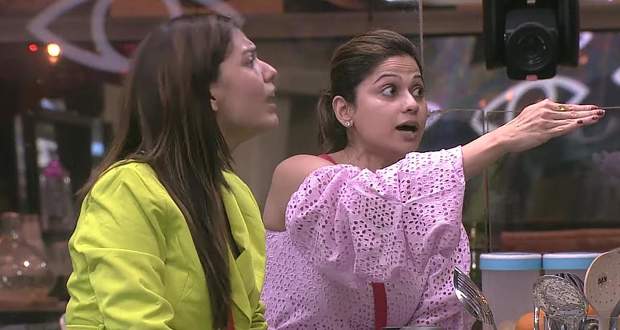 Pratik Sehejpal tells Shamita Shetty to put the utensils in the basin for cleaning while Divya Agarwal instigates her against him.

Pratik comments on the quantity of food wasted which makes Divya and Shamita argue with him as they curse at him.

Later, Ridhima Pandit reads the instructions about the task 'Mera Connection No.1' which will give the privilege of receiving all the items of the connection of the winning male contestant.

In the first round, Raqesh Bapat is out of the task.

In the second round, Divya disqualifies Pratik but he doesn't listen to her and participated in the task which causes an argument between the two.

In the third round, Karan Nath is outed while Millind Gaba is outed in the fourth round.

Lastly, in the fifth round, Zeeshan Khan loses and Nishant Bhat wins the task.

Later, Shamita talks with Divya and tells her that she has had a bad experience with Nishant which is why she does not wish to be near him.

Bigg Boss surprises the contestants by informing the female housemates that they can get any 25 items of their as a reward.

Pratik and Zeeshan get into an argument while discussing the duties for the next day.

Zeeshan tries to instigate him but feels attacked by Pratik touching him.

Lastly, Neha tries to talk to Pratik and get his side of the story.

© Copyright tellybest.com, 2020, 2021. All Rights Reserved. Unauthorized use and/or duplication of any material from tellybest.com without written permission is strictly prohibited.
Cached Saved on: Friday 15th of October 2021 07:29:58 AMCached Disp on: Thursday 21st of October 2021 08:10:21 PM