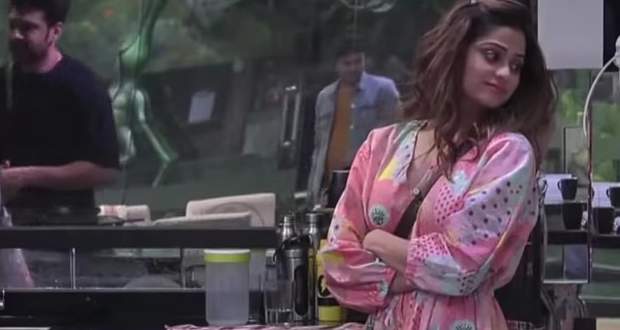 Today's Bigg Boss 15 11 December 2021 episode starts with Farah Khan greeting the audience and telling them that she is there to fill in for Salman Khan.

A clip shows Karan Kundra trying to talk to Tejasswi Prakash and saying that she is putting others above their relationship.

Another clip shows Rakhi Sawant telling Rashmi Desai to talk to Ritesh Singh and get his idea on what he would do about his first wife after exiting the show.

Farah greets the contestants and warns them to not overlap each other when talking and, scares them that Salman is fed up with them.

Further, she humorously points out everyone's mistakes and tells them to get their act right or they will lose the game.

She asks them to talk among themselves and decide which contestant created the most chaos this weekend and will have to go to jail as a punishment.

She further says that the most voted will get a chance to justify themselves, and if they fail, they will get another punishment along with jail time.

Tejasswi, Karan, Umar Riyaz, Devoleena (Debu) Bhattacharjee, and others decide to take Pratik Sehejpal's name while Rashmi goes to him and warns him.

Farah asks the contestants to give their answers and Rashmi takes Debu's name which causes an argument in front of everyone.

The responses continue and another argument starts between Rajiv Adatia and Abhijit Bichukle.

Rashmi is the most voted after which Farah tells her to justify herself and Rashmi manages to justify that she is being cornered by everyone.

Farah tells the contestants that she is disappointed in them and tells Rashmi that she is still eligible to take part in the tasks and in the race to the finale.

Afterward, the contestants get questioned by some of the audience through videos and they try to give the possible answers.

Farah jokes with Rakhi about Ritesh and tells her that she will find her another husband.

Farah bids them goodbye after which Debu argues with Abhijit for taking her name during the voting for jail time.

Nishant Bhat tells Rashmi that Debu planned everything which again causes an argument between her and Debu.