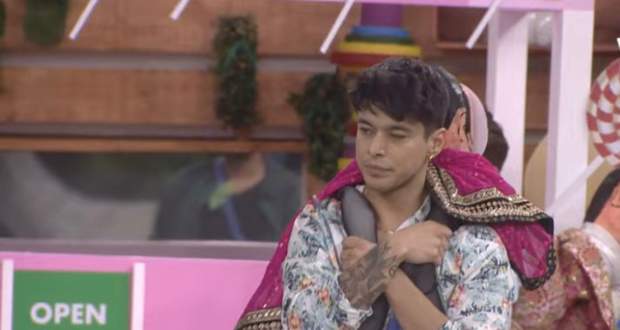 Bigg Boss announces that the boys are being given a chance to change their connection and have a chance to make a connection with Divya by pressing the buzzer in the garden area.

Zeeshan Khan apologises to Urfi Javed and presses the buzzer which gets her upset saying that he didn't even discuss it with her.

Zeeshan passes a comment at Moose for not doing her duty and gets into an argument with her while Pratik tries to diffuse it.

Bigg Boss announces that due to Zeeshan pressing the buzzer, his connection is now Divya while Urfi has gone into nomination for Bigg Boss elimination.

Later, Shamita gives the introductions for the nomination task and states that one person from the connection will be inside the makeshift house and the other one will be outside. One connection pair will lose and will go into the elimination with Urfi.

Neha Bhasin and Millind Gaba win the first round by coloring Millind's hair.

Moose and Nishant Bhat win the second round by announcing themselves as nominated for the next week.

For the third round, the connections have to hand over all the fruits to the Bigg Boss by putting them in the storage room which causes arguments between contestants in the house.

Zeeshan tries to do the task while Karan Nath and Shamita try to stop him.

Later, Pratik announces Zeeshan and Divya as safe while Raqesh and Shamita leave the task saying that it is not fair as Zeeshan didn't collect all the fruits.

Lastly, Raqesh and Shamita quit the task and Bigg Boss announces them as the nominated contestants for elimination along with Urfi.

However, Bigg Boss surprises them by announcing that one more pair will be eliminated by the voting done by the audience.