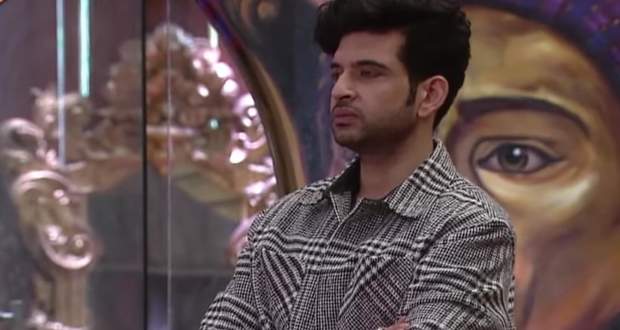 Today's Bigg Boss 15 13 January 2022 episode starts with (Day 103) Nishant Bhat and Shamita Shetty arguing over her not letting him become the shop owner in the next round.

Just then, Rakhi Sawant starts destroying the shop saying that she will go next.

Bigg Boss calls Shamita into the confession room and tells her that the housemates can become shop owners more than once.

In the fourth round, Rakhi gives a spare part to

At night, Tejasswi Prakash takes her cycle to the bathroom area while Pratik Sehejpal goes after her with his own cycle and tries to steal her tire.

However, Bigg Boss tells them that removing the cycle from its original place is not allowed and tells them to keep it back.

Later, Tejasswi tries to safeguard her cycle while Pratik accuses her of hitting him.

At night, Nishant Bhat questions Shamita and tells her that he thinks it is not justified that she degraded Tejasswi.

However, Shamita reveals that she did it because he supports only Tejasswi.

Later, Tejasswi tells Nishant that she will fight for herself from now on while he says that they should convince Abhijit Bichukle to support her the next day.

Afterward, Tejasswi goes to Karan Kundra and tells him that Nishant's priority is Shamita and Pratik and he always secures them first before supporting anyone else.

Day 104 starts with everyone waking up to the song 'Kamli'.

At task again starts and Rakhi steals Tejasswi's cycle and tries to throw it in the pool but fails as Tejasswi stops at the right time.

Pratik again tries to steal Tejasswi's tire and she keeps hitting his hand with a mug injuring him.

Tejasswi cries and tells Pratik to enjoy his victory as he has destroyed her cycle while Devoleena (Devo) Bhattacharjee starts fighting with Tejasswi.

In the next round, Rakhi gives the seat to Pratik.

© Copyright tellybest.com, 2020, 2021. All Rights Reserved. Unauthorized use and/or duplication of any material from tellybest.com without written permission is strictly prohibited.
Cached Saved on: Thursday 20th of January 2022 10:11:29 PMCached Disp on: Friday 21st of January 2022 05:11:47 PM