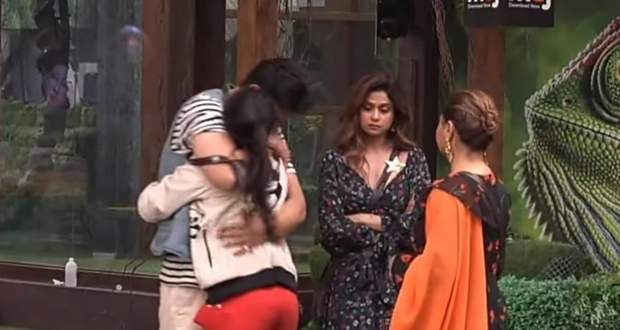 Inside the BB House, Tejasswi Prakash and Pratik Sehejpal arguing over breakfast and him calling her stupid.

However, Karan Kyndra stands up for Tejasswi and argues with Pratim while Rakhi Sawant speaks ill about Tejasswi.

Elsewhere, Salman Khan welcomes Gauhar Khan and reveals that she has given the first  glimpse of the trophy to the housemates and shows the BB House once again.

Inside the BB House, Gauhar greets the housemates and shows them the triumphs for the first time and further makes them play a task in which she pairs them in a group of three and asks who they do not deem as challenges.

She bids them goodbye after which a clip shows all the contestants getting tested for something.

Salman greets the housemates and tells them that they got tested for Nomricorn in which the infected person knows everything.

He says that Rakhi is infected and confronts her about the comments and verdicts she made on Karan and Tejasswi's relationship.

Afterward, he says that Pratik is also infected and rebukes him for talking wrong about the channel and tells him to not do it again.

Further, he says that Tejasswi is also infected and scolds her for accusing the makers and the channel of favoring Shamita Shetty.

He further scolds Tejasswi for playing the victim card during the ticket to finale task with Pratik while she tries to justify her answers.

Later, Shamita tells Karan that he did good by supporting Tejasswi but his method was wrong.

© Copyright tellybest.com, 2020, 2021. All Rights Reserved. Unauthorized use and/or duplication of any material from tellybest.com without written permission is strictly prohibited.
Cached Saved on: Wednesday 19th of January 2022 01:39:38 PM