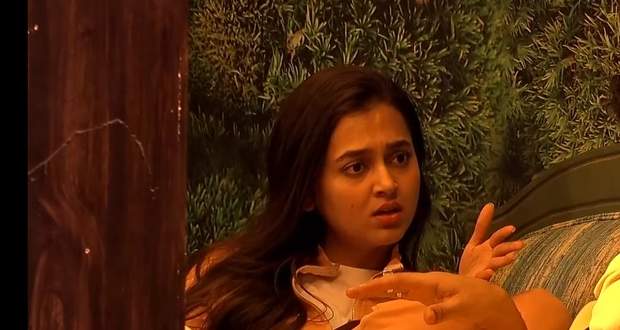 Pandit Janardhan Ji informs the inmates about their immediate future, just by studying them.

After Pandit Janardhan Ji leaves, Shamita Shetty tells Nishant Bhat and Pratik Sehejpal that she would like to get married this year as soon as possible.

However, an abrupt argument erupts between Shamita and Nishant. Shamita thereby calls him “judgemental”.

The three panelists on the show are invited to question the inmates. They term the game played by all the candidates as very “calculated”.

The discussion begins regarding Rakhi Sawant’s and Abhijit Bichukle’s part in the game.

Contestants discuss whether Big Boss favors Rakhi and Abhijit more for their entertainment role or not.

Abhijit is put under pressure by the panelists for his vulgar usage of language in the house.

Rashmi Desai joins the discussion and blasts Abhijit for his views against women, their choice of clothing, etc.

The discussion alters into a heated argument with both the parties hurling abuses at one another.

Tejasswi Prakash gets defensive and jealous when Rakhi along with Salman Khan starts pulling her leg.

Nishant and Shamita also fight because Shamita previously promised to save Tejasswi from elimination but instead saved Rakhi in the end.