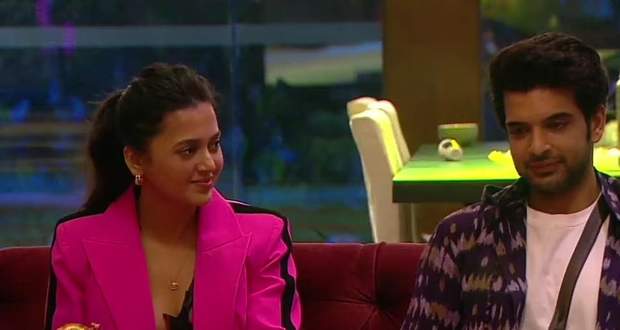 Later, Pratik tries to talk to Neha Bhasin but she tells him that she doesn't want to humiliate herself by talking to him.

At night, Karan tells Tejasswi that she is his teammate and she agrees while stating her abilities.

Day 48 starts with everyone waking up to the song 'Apna Time Aayega'.

Tejasswi ans Rajiv Adatia discuss the menu for the day while Nishant and Pratik intervene as Tejasswi starts crying saying that they are ordering her.

However, Karan goes to her and comforts her while Jay Bhanushali goes to talk to Nishant.

Karan helps Tejasswi in cooking while Jay talks to Nishant and gossips about Karan.

Karan informs the contestants about the Garnier Man Pimple Facewash challenge in which Karan and Tejasswi win.

Later, everyone is discussing while Neha starts shouting at Pratik.