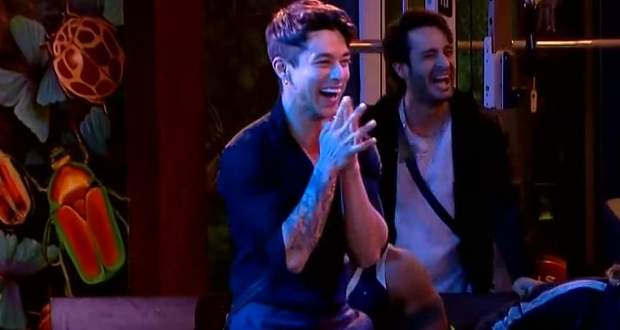 Today's Bigg Boss 15 19 November 2021 episode starts with (Day 48) Karan Kundra cooking dinner and asking for help which causes a fight between the contestants.

Tejasswi Prakash taunts Rajiv Adatia for not doing the chopping and argues with him after which Rajiv complains about it to Neha Bhasin.

He and Neha go to all the other contestants to complain while Neha insults Pratik Sehejpal and tells him to get out of the house.

Nishant Bhat tells them to argue later and breaks item and starts shouting.

Neha gets violent and others try to calm her while Karan takes Nishant to the bathroom to calm him.

Later, Nishant is sitting with the boys while Neha suddenly comes there and starts questioning him.

Pratik tries to support Nishant when suddenly Neha gets angry at him and starts pushing him.

Neha keeps calling him disgusting and says that she feels betrayed and locks herself in the bathroom while others try to comfort Pratik.

Later, Karan and Nishant support Pratik saying that he is very sensible while Neha keeps complaining about him to other contestants.

Pratik goes to Neha to calm him when she starts rebuking him.

At midnight, everyone wishes a happy birthday to Neha while Pratik and Nishant hug her and patch up with her.

Further, Neha discusses with Pratik and Nishant while explaining their reactions.

Day 49 starts with everyone waking up the song 'Radha'.

Neha and Nishant again talk and try to clear their misunderstandings.

Later, Rajiv is working in the kitchen while Tejasswi takes vegetables from him saying that there is a shortage and she can't give it to him creating a huge argument.

Further, Tejasswi makes everyone question if they are okay with her handling the rations of the kitchen items.

Simba Nagpal is talking to Neha about contestants while Rajiv questions Tejasswi about her feelings for Karan.