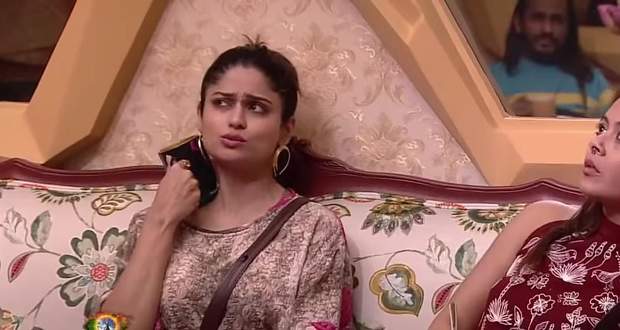 Today's Bigg Boss 15 1 December 2021 episode starts with (Day 60) Devoleena Bhattacharjee and Shamita Shetty refuse to come to a final decision while Bigg Boss tells them to announce who is the winner.

However, they announce that they can't come to a conclusion and keep on arguing.

At night, Bigg Boss announces that the timeline for today's BB Games task is over.

Tejasswi Prakash talks to Karan Kundra about how she thinks Abhijit Bichukle is a misogynist and how Pratik Sehejpal told her to inform him if Abhijit makes any cheap comment on her.

Day 61 starts with everyone waking up to the song 'I Hate Luv Storys'.

Rashmi Desai argues with Tejasswi who shuts her up saying she shouldn't talk of sue thinks she is above everyone.

All the VIPs joke among themselves while Pratik and Tejasswi plan to win the game today.

Meanwhile, Rashmi tells Karan that she thinks Tejasswi doesn't like her and is holding a grudge against her.

A buzzer sound is heard indicating the start of BB Games after which Tejasswi reads about the Polo game being played for the winning amount of 10 lakhs.

During the game, Rakhi and Rakesh accuse Karan and Tejo of using force to win the game.

However, to not lose the money, Shamita agrees with Devoleena and calls it a tie.

Bigg Boss announces that the BB Games task is over with 45 lakhs in the VIPs vault.

© Copyright tellybest.com, 2020, 2021. All Rights Reserved. Unauthorized use and/or duplication of any material from tellybest.com without written permission is strictly prohibited.
Cached Saved on: Wednesday 19th of January 2022 12:55:39 PM