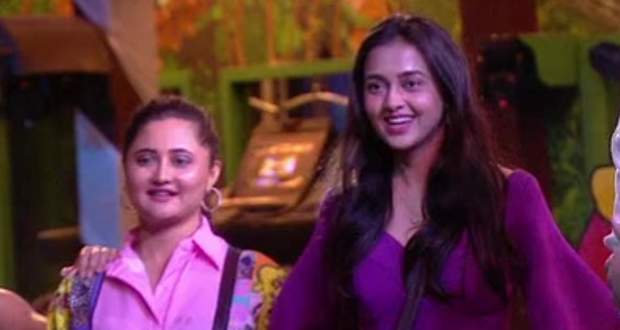 Nishant Bhat wins the task and is saved from the elimination. Nishant gets a straight ticket to the finale.

Other contestants who lose the task are Tejasswi Prakash, Rashmi Desai, Abhijit Bichukle, and Devoleena Bhattacharjee.

Later, Bigg Boss announces yet another task for the aforesaid contestants to win a definite spot in the finale.

Pratik Sehejpal and Shamita Shetty can be seen discussing Nishant’s hypocritical behavior. Shamita is irked by the abruptness of Nishant’s behavior.

Nishant is now spending more time in the company of Karan Kundra and Tejasswi. And this does not suit well with Shamita.

Meanwhile, Rajiv Adatia has a conversation with Nishant about Shamita. Nishant makes it clear to Rajiv that right now he wants to be left alone.

The next day, the new task by the name of “Mannequin Challenge” begins.

Tejasswi, Rashmi, Abhijit, and Devoleena have to decorate their respective Mannequins with their clothes and accessories.

The contestant who receives the most autographs from other inmates will be going to the finale.

In the first round, Tejasswi gets the most autographs, followed by Devoleena and then Rashmi.

In the second round of the Mannequin challenge, Tejasswi leads the tally, followed by Devoleena.

Abhijit does not receive any autographs. Subsequently, Rashmi begins to fear for her spot and is left feeling betrayed.

The only support Rashi receives is from Shamita’s side.

Pratik wants to save Devoleena but Rakhi Sawant's decision-making keeps getting swayed by Karan’s and Rajiv’s opinions.

Rakhi dithers in her decision making and all hell breaks loose in the Bigg Boss House.

Upcoming Big Boss 15 episode updates: Rashmi and Devoleena get into an intense argument.