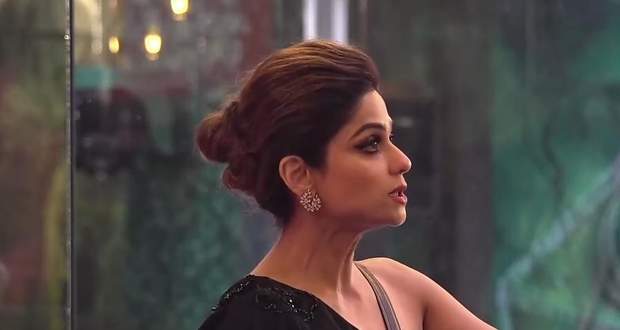 Today's Bigg Boss 15 20 November 2021 episode starts with Salman Khan greeting the audience and revealing that they will get their top five contestants at the end of the weekend ka vaar.

Further, he greets Shamita Shetty who is sitting in a special room, and greets the contestants inside the house.

Salman tells Simba Nagpal to bring a folding bed from the storeroom and tells him to sleep on it while he announces Shamita's arrival.

Salman asks Shamita to call one contestant in the witness box after her experience of watching them from outside for one week.

She calls in Rajiv Adatia first and questions his reasoning for willingly being in the jail and the VIP section.

Further, she calls in Nishant Bhat and asks him what is more important to him, game or friends which causes an argument after which she once again silences him by asking him why he chose Simba Nagpal instead of Jay Bhanushali.

Karan Kundra agrees with Shamita which causes an argument between him and Nishant.

Neha Bhasin comes on the witness box next and she explains how she was hurt by Pratik's actions as Shamita consoles her.

Later, Salman welcomes Mahesh Manjrekar and introduces him to the contestants.

At night, a siren is heard and the contestants rush to the garden when they see a scroll that reads that a thunderstorm is coming.

Nextly, Salman wishes them good luck and sends them inside while Mahesh takes his leave.

Mahima Makwana and Aayush Sharma grace the set and make the contestants choose between Neha-Pratik and Karan-Tejasswi and whom they want to break the relations.

Everyone chooses Neha-Pratik after which the guests leave while contestants get surprised seeing media in the garden.

Bigg Boss announces that the media will decide who will be in the bottom six.

© Copyright tellybest.com, 2020, 2021. All Rights Reserved. Unauthorized use and/or duplication of any material from tellybest.com without written permission is strictly prohibited.
Cached Saved on: Monday 22nd of November 2021 11:51:53 PMCached Disp on: Sunday 28th of November 2021 07:19:00 PM