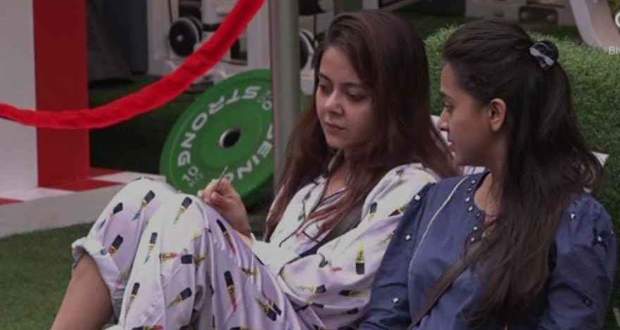 Tejasswi Prakash is leading in the Mannequin task. However, Rashmi Desai feels betrayed by the fact that nobody is backing her up.

Everyone’s eye is on Rakhi and to who she is going to give her autograph.

Pratik counsels Rakhi that she should not listen to anyone and just do what her heart feels.

Rashmi corners Rakhi and tells her that it was Rashmi all along who stood up for Rakhi, not Devoleena.

This comment of Rashmi’s irks Devoleena and Devoleena suggests Rakhi make a decision for her.

Rajiv Adatia hugs Rashmi and takes her alone inside the room.

The task gets over and Bigg Boss announces Tejasswi as the winner.

Tejasswi is relieved and Karan Kundra tucks the Star-shaped sash on Tejasswi, signifying her saved spot in the finale.

Later in the day, Rakhi and Rashmi’s conversation erupts into an argument.

Meanwhile, Shamita Shetty tells Rajiv that he has been unfair in the Mannequin task due to his friendship with Rashmi.

Devoleena, Abhijit Bichukle, and Rashmi are nominated and their journey further will only be decided by the viewers watching them.