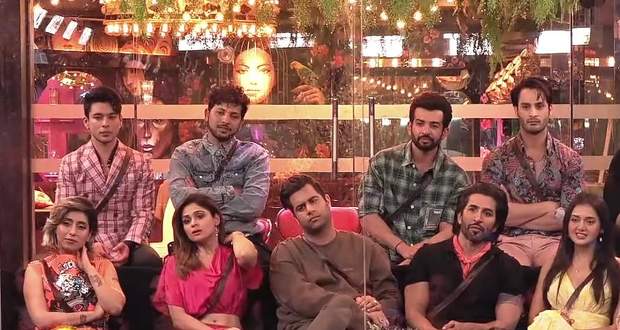 Today's Bigg Boss 15 22 November 2021 episode starts with Shamita Shetty gets questioned why she stops Rajiv Adatia from doing things after which she answers that she is possessive of him as a sister.

However, Tejasswi Prakash starts up an argument about Pratik Sehejpal bullying him which Rajiv clears.

Afterward, Vishal Kotian gets questioned in which context did he say that Tejasswi is using Karan Kundra.

Jay Bhanushali alleges Vishal of downplaying him and argues with him in front of the media after which Neha Bhasin is asked why she is playing with Pratik's feelings.

Later, Tejasswi is asked why she calls Neha and Shamita bossy while she bosses around Karan all day.

Further, Karan is asked about his relationship status with Tejasswi and he tries to put off the topic but Tejasswi calls him her boyfriend.

The Bigg Boss announces that it is the end of the questioning session and tells the media to announce the bottom six.

Shamita and Nishant get into an argument while Karan apologizes to Umar.

Elsewhere, Vishal tries to justify his actions with Pratik and others but Pratik supports Shamita which causes an argument.

Jay and Vishal get into a violent fight and everyone tries to calm Jay while Vishal keeps instigating him.

Afterward, a reporter from Times Of India questions Abhijit but he backlashes her and insults her.