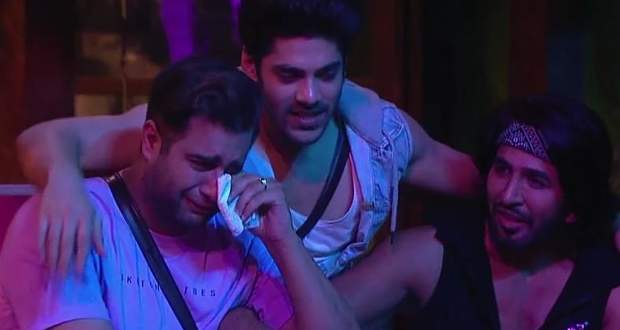 Today's Bigg Boss 15 23 November 2021 episode starts with Abhijit Bhichukle accuses a reporter of twisting his words and gets into an argument with her while the reporter moves on to Devoleena Bhattacharjee.

Elsewhere, Vishal Kotian still tries to justify his wordings while Tejasswi Prakash tells him to not objectify women qnd justify himself.

At night, Tejasswi snuggles to Karan Kundra and talks to him while Bigg Boss warns her to not whisper.

Shamita Shetty makes Vishal apologize to her family and Rakesh Bapat for his wrong wordings.

Day 52 starts with everyone waking up to the song 'Tera Buzz'.

Tejasswi argues with Karan for supporting Vishal while he tells her that they will get away from each other if they keep fighting.

Meanwhile, Nishant and Simba Nagpal do drama for getting tea.

Karan tells Tejasswi that they should halt their relationship while they are in the Bigg Boss house as he doesn't want to create trouble and apologizes to her while hugging her.

Later, Tejasswi tries to talk to Karan who tells her that he is insecure and tells her to not go to his friends and ask what his problem is.

He angrily behaves with her while she keeps trying to have a conversation with him.

However, he goes to her after some time and tells her that he doesn't want to lose her while she tried to cheer him up.

At night, Shamita sits with Rajiv and tells him to not bash other contestants for the guests leaving and try to be over smart.