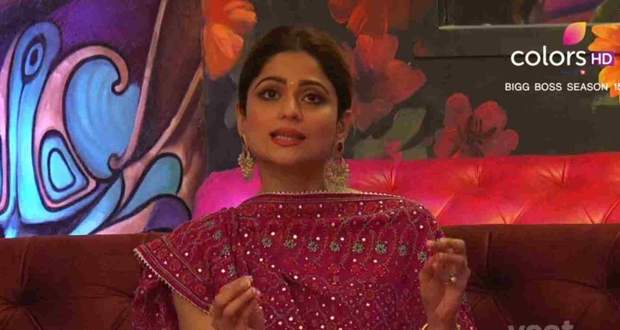 The contestants are anxious to get the maximum number of scores they can from the live audience that has come into the Bigg Boss House.

Rakhi Sawant is anxious to secure her spot and has decided to play the BB Hotel task in a way that becomes highly entertaining for everyone. Rashami Desai and Rakhi have a conversation about Karan Kundra and decide to seduce him in a way that is entertaining.

Rashmi shakes her head in negative. However, Rakhi talks about Tejasswi Prakash’s irritating possessiveness over Karan.

Later Tejasswi and Karan talk about Shamita Shetty in the bathroom after round 3 of BB Hotel task gets over.

Karan asks Tejasswi if Shamita has talked to her or not. Tejasswi denies and further tells Karan that Shamita has a problem with her as Tejasswi is receiving more votes than Shamita.

In Round 4 of BB Hotel task, Rakhi decides to become a ghost and ends up scaring Pratik.

In the same round, Rakhi tells Karan to apologize to Shamita on behalf of Tejasswi, and the audience cheer for it.

At the end of the BB Hotel task, Bigg Boss announces that the interaction that occurred between RJ Palak and RJ Karan was successful.

Hence, Bigg Boss announces that the prize money for the Bigg Boss Season 15 is 50 lakh rupees.

In the end, Rakhi Sawant gets eliminated and the final six contestants of Bigg Boss Season 15 remain Shamita, Tejasswi, Karan, Nishant, and Pratik.