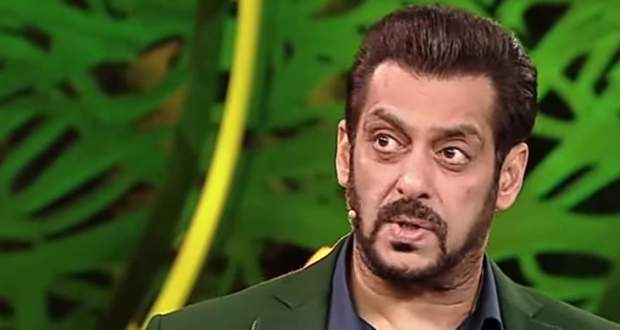 Rites gets the word Fake and he puts Karan Kundra, Tejasswi Prakash in 1st and 2nd rank saying that he thinks their relationship is fake.

However, Salman tells him that people count say that his relationship with Rakhi Sawant is also fake is just for fame tells him to rethink his decision.

Shamita Shetty argues with Umar Riyaz while Rakhi tells Tejasswi to not be upset with Rakesh's statement as he tries to explain his view to her.

Suniel makes Rajiv Adatia try speaking some of his dialogues.

Salman and the guests make the contestants select a member for the slogan they are given and give their reasoning for it.

Neha Dhupia enters the Bigg Boss house inside a glass room and greeted the housemates.

She firstly questions Karan about what he is doing in the show after he has had such a good experience with reality shows in the past.

She asks pairs of contestants to come to the center and pick three traits from the pile of boards that they think are for them.

Further, she tells other contestants to choose two traits for other chosen contestants.

Rakhi Sawant and Rakesh get into an argument with Tejasswi and Karan which creates a big issue.

© Copyright tellybest.com, 2020, 2021. All Rights Reserved. Unauthorized use and/or duplication of any material from tellybest.com without written permission is strictly prohibited.
Cached Saved on: Thursday 20th of January 2022 05:21:35 AM