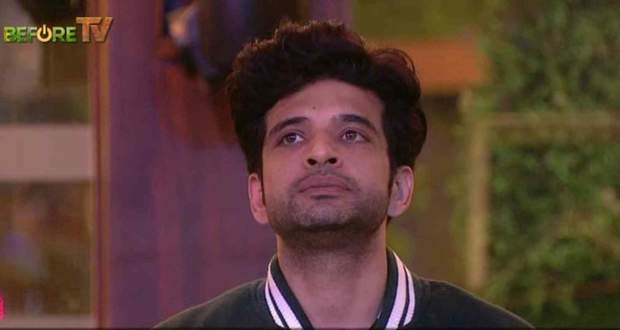 The mothers of the final six finalists grace the stage alongside Salman Khan.

Salman Khan greets the six finalists sitting inside the house.

As soon as all of them see their mothers, they begin to get emotional.

All the mothers share how they felt watching their child inside the Bigg Boss House and some of the inmates, including Pratik Sehejpal and Rashami Desai, openly crying.

However, Salman Khan informs the finalists that one of them will get eliminated today.

All the mothers get a board of their child’s face on it but covered.

Upon announcement of the contestant’s name, their mother will uncover their board.

If the board is green, it signifies that the contestant is safe.

However, Rashami Desai gets eliminated and walks out of the Bigg Boss House.

Later, Salman interacts with the five finalists and tells them that he has a surprise awaiting them.

In the audience, all the eliminated contestants of Bigg Boss Season 15 are sitting.

Amongst them is Raqesh Bapat who asks a question from Tejasswi.

Raqesh tells Tejasswi that she was creating unnecessary drama for his lady love Shamita and makes it clear that Shamita is not interested in Karan.

Shamita requests Tejasswi to accept the ill-treatment meted out to her by Tejasswi but the latter keeps refusing.

The duo’s fight intensifies in the house even after the live interaction with the ex-contestants gets over.

Salman Khan later informs the audience that the ex-winners of Bigg Boss will go inside the house and let the top five finalists decide about the takeaway prize money worth Rupees 10 Lakhs.

Who is going to take it and walk out of the Bigg Boss House Season 15?

Will it be Shamita, Nishant, Tejasswi, Karan, or Pratik?