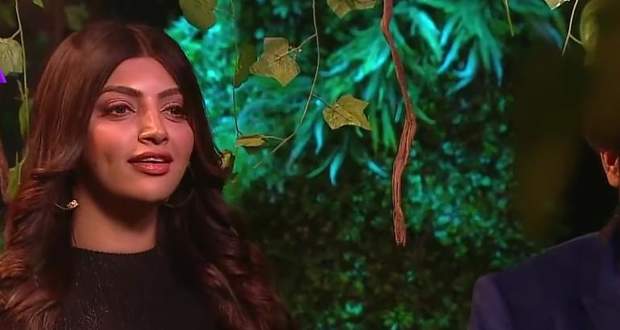 Today's Bigg Boss 15 2 January 2022 episode starts with (Day 92) Karan Kundra telling Nishant Bhat that he is getting detached from Tejasswi Prakash due to her compulsive behavior.

Meanwhile, Rashmi Desai accuses Rakhi Sawant of destroying the bathroom area while Devoleena (Devo) Bhattacharya accepts that she did it and creates drama.

Later, Karan is trying to make a cake for Umar Riyaz while Tejasswi comes and tells him that she wanted to help but he dismisses her.

Day 93 starts with everyone waking up to the song 'Dhoom Machale Dhoom'.

Later, Pratik Sehejpal learns that Abhijit Bhichukle used a degrading word for Devo and warns him to not do it again.

Elsewhere, Rakhi tells Tejasswi that she is being too close to Karan by hugging and kissing him while Devo also joins in and agrees with Rakhi.

Later, Tejasswi tries to confront Devo while Pratik comes there and supports Tejasswi saying that she is an adult and takes her own decisions.

During lunch, Rakhi tells Abhijit to mind her words from now on as it's not looking good which creates a big fight.

Elsewhere, wildcard contestants Surbhi Chandana, Vishal Singh, Munmun Datta, and Akansha Puri introduce themselves to the audience and enter the fake house in the BB House.

Later, Bigg Boss announces that there are 4 wildcard contestants to the housemates and tells them that they have already won the ticket to the finale.

However, the contestants can snatch the ticket to the finale by winning a set of tasks given later in the day.

After some time, the wildcards get the scripted versions of a set of tasks which they have to act out in front of the tasks.

Later, Vishal gives the Yes challenge to Karan and Nishant but Pratik and Umar get into a fight leading to chaos.

Bigg Boss scolds the contestants and tells them to start the task again.

Nishant fails to win against Karan as he starts to vomit while Bigg Boss tells Karan to wait till the end of the whole task to know the results.