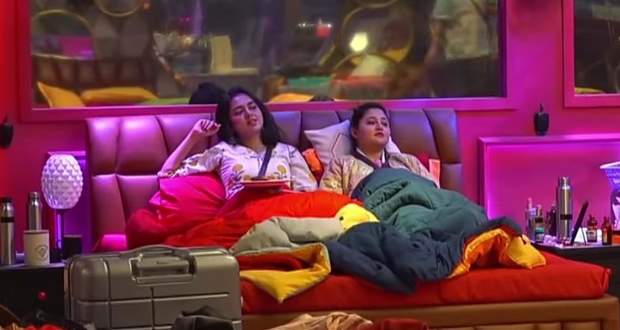 Today's Bigg Boss 15 4 January 2022 episode starts with (Day 93) Pratik Sehejpal telling the housemates that Devoleena (Devo) Bhattacharjee is breaking something in the bathroom area and the housemates convince her to come out.

Inside the fake house, Akanksha Puri and Surbhi Chandana do the scripted version of the pillar task and Surbhi wins who gives the challenge to Rashmi Desai and Devo.

Karan, Umar Riyaz, and Rakhi Sawant are the coordinators of the task and told the rules after which the task starts.

Pratik starts torturing Rashmi while Umar and some other housemates torture Devo.

Later, Tejasswi cries thinking that she didn't get the ticket to the finale, and talks to Nishant Bhat while Rakhi tells Karan to talk to Tejasswi once.

However, Karan tells Rakhi that Tejasswi is doing drama since he saw her joking and laughing with Nishant a while back.

Afterward, everyone goes to sleep except for Umar and Pratik who watch over the task.

Day 94 starts with everyone waking up to the song 'Badal Pe Paon Hain'.

Devo tells Pratik to splash buckets of water on her as she wants to pee and he does so while Umar praises Devo's will.

Later, Karan argues with Tejasswi for supporting Pratik during tasks while Karan swears at her and shocks everyone.

Tejasswi cries in the bedroom area and vents to Nishant and Pratik who try to calm her.

Pratik and Nishant go to confront Karan while Tejasswi also comes there and argues with Karan.

Unar tries to cut the cloth between Devo's hands and injures her finger while Rakhi keeps trying to stop him.

Pratik splashes water on him and Umar pushes him violently towards the pool.

In the evening, Bigg Boss rebukes Umar for using violence even after being scolded and warned many times and tells him that the punishment will be given during the Weekend Is Vaar episode.

Later, Bigg Boss tells Devo and Rashmi to remove their shoes and socks after which Nishant throws water under Devo's legs leading her to slip from the pillar and lose.

Afterward, Bigg Boss announces that the wild cards are not coming inside the house and we're present only for the sole purpose of ticket to the finale.

Bigg Boss announces that Karan, Umar, and Rashmi have won the ticket to finale.

Later, Umar tells Rashmi that he's angry at her for giving Nishant more credit for making her win the task.

Upcoming Big Boss 15 episode updates: Tejasswi and Devo to insult each other.

© Copyright tellybest.com, 2020, 2021. All Rights Reserved. Unauthorized use and/or duplication of any material from tellybest.com without written permission is strictly prohibited.
Cached Saved on: Thursday 20th of January 2022 04:05:46 AM