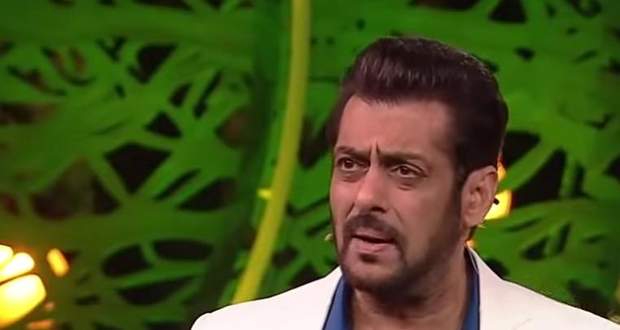 Today's Bigg Boss 15 5 December 2021 episode starts with Rashmi Desai takes Abhijit Bichukle's name saying that he is disrespectful towards contestants of the house as he uses indecent words for girls like he did with Shamita Shetty.

Shamita gets angry and starts arguing with Abhijit and he says that girls like her are under his shoes and says that he will leave the house while the other gents try to calm him.

Shamita starts talking informally to Salman and says that she will leave the show while asking why people like him are brought into the show.

However, Salman tries to tell her that Abhijit didn't tell it to her and further scolds her for saying such wrong things and creating a huge scene.

Salman leaves after which the housemates part into two teams in which one supports Shamita while others sympathize with Abhijit.

Further, she goes inside the Bigg Boss house through a glass room and plays games with the contestants.

She takes her leaves as Shamita goes to Abhijit and apologizes to him.

Salman scolds the contestants for bashing others for their language barriers and tells them that it's their responsibility to protect their respect.

Later, Rajiv Adatia and Rashmi talk about Umar Riyaz's relationship as Rajiv tells her to be careful.

Lastly, Salman bids goodbye to the audience and leaves.

Upcoming Bigg Boss season 15 written episode update: VIPs to save one of the non-VIPs from elimination.

© Copyright tellybest.com, 2020, 2021. All Rights Reserved. Unauthorized use and/or duplication of any material from tellybest.com without written permission is strictly prohibited.
Cached Saved on: Friday 21st of January 2022 04:20:58 PM