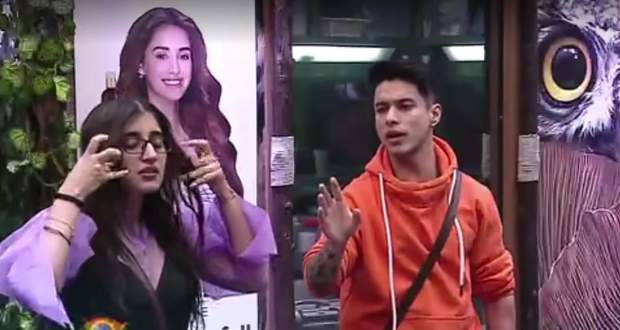 Today's Bigg Boss 15 5 October 2021 episode starts with Afsana Khan making bread and giving it to all the outsider contestants while Pratik Sehejpal is upset that she is breaking the rules.

Later, Meisha Iyer flirts with Pratik while he tried to sort out his problem with her.

However, Arjun Bijlani intervenes and gets into an argument with him as they start cursing each other.

Arjun tries to break the door while Shamita Shetty gets injured and shouts at them to stop.

Pratik goes outside and tries to stop them while Maisha takes Jim away and tells him to not intervene as he will get injured otherwise.

Nishant Bhat tries to calm the outsider's contestants while Karan Kundra tells her to give them the map.

Arjun curses at Pratik's mother which makes him furious and he goes to fight him while others stop him but the glass gets destroyed in the process.

Vishal Kotian tells Arjun to not fight for him and tried to calm him.

At night, Shamita talks about Umar Riyaz and Simba Nagpal's aggressiveness while Nishant tries to figure out the situation.

© Copyright tellybest.com, 2020, 2021. All Rights Reserved. Unauthorized use and/or duplication of any material from tellybest.com without written permission is strictly prohibited.
Cached Saved on: Wednesday 13th of October 2021 09:21:32 AMCached Disp on: Thursday 21st of October 2021 08:23:43 PM