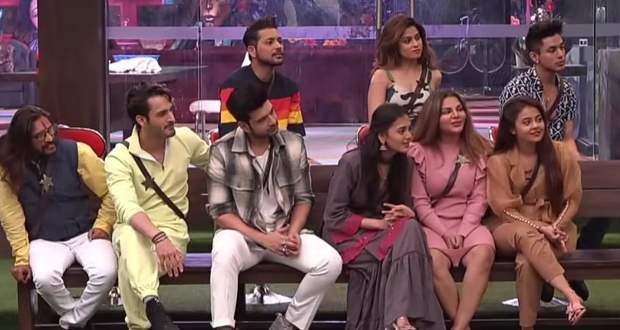 Today's Bigg Boss 15 7 January 2022 episode starts with (Day 97) Abhijit Bichukle and Shamita Shetty continue their debate while the judges keep giving their input to the conversation and announce Shamita as the winner.

Later, Rakhi Sawant is rebuking Tejasswi Prakash and tells others to not support her while Rashmi Desai tells Karan Kundra that Rakhi has been doing it since the previous day.

The next round is between Tejasswi and Shamita while Tejasswi says from the start that she knows she isn't going to win.

In the end, Shamita wins and Tejasswi fumes in anger but gets happy once Bigg Boss announces that Tejasswi, Abhijit, and Shamita win the ticket to finale.

Tejasswi starts acting nice to Karan and he also acts nice to her after which Rashmi tells Karan that she doesn't like Tejasswi's attitude.

Rashmi goes to Tejasswi and talks to her while Devoleena (Devo) Bhattacharya tells Pratik Sehejpal that he doesn't love her.

Day 98 starts with everyone waking up to the song 'Wake Up Sid'.

Bigg Boss announces a lighthearted task in which the contestants will read out secrets on a chit and will guess whose secret is it while feeding a Hershey's kiss.

At night, Tejasswi sleeps beside Karan and tells him that he has played for Umar's girlfriend, Rashmi but Umar has never played for her.

At around 3 in the night, Rakhi starts banging kitchen utensils and wakes up the housemates after which she makes Karan promise to not disturb the housemates at night again.

© Copyright tellybest.com, 2020, 2021. All Rights Reserved. Unauthorized use and/or duplication of any material from tellybest.com without written permission is strictly prohibited.
Cached Saved on: Wednesday 19th of January 2022 12:58:56 PM