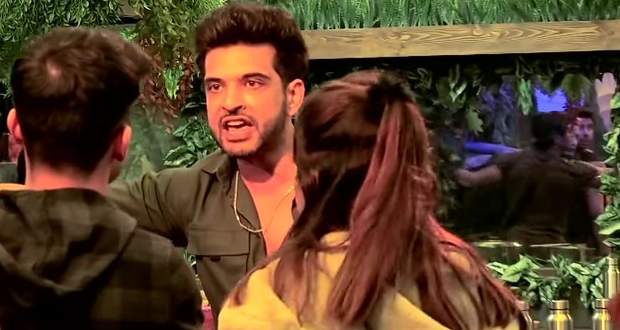 Akasa Singh reveals to Pratik Sehejpal that she is the kind of person who needs attention while he reveals that he mainly focuses on the negative effects rather than the positive ones.

Meanwhile, Karan Kundra discusses with other Junglewasi's how to tense the insiders and get the map.

Later, Vishwasundari tells the junglewasi's that she will be giving them their clothes and tells them to select 5 people who will not get their clothes along with the roadmap.

Afsana Khan eats items from the main house and Nishant Bhat goes to the junglewasi's to complain but Karan gives him a befitting reply.

In the evening, the cave opens and Simba Nagpal hides the roadmap while the insiders try to steal it.

Pratik and Arjun Bijlani fight over luggage while Bigg Boss tells them to not get physical.

Later, Shamita Shetty gets into an argument with Pratik for their luggage while Nishant sides with Shamita.

The junglewasi's steal Shamita's luggage and she tells Pratik and Nishant to handle it but they refuse.

Pratik goes to the room tries to pick apart the lock while Shamita gets angry and gives her part of the map to Junglewasi's which makes Nishant angry.

© Copyright tellybest.com, 2020, 2021. All Rights Reserved. Unauthorized use and/or duplication of any material from tellybest.com without written permission is strictly prohibited.
Cached Saved on: Wednesday 13th of October 2021 10:56:10 AMCached Disp on: Thursday 21st of October 2021 08:59:57 PM