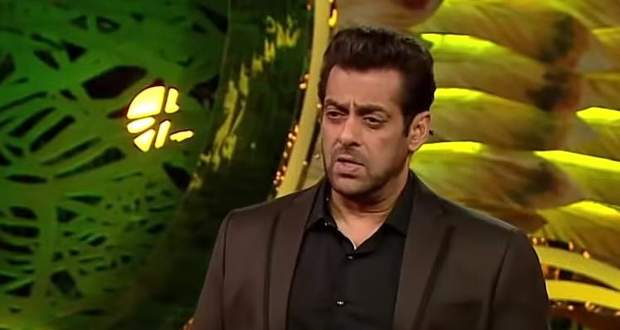 Today's Bigg Boss 15 8 January 2022 episode starts with Salman Khan greeting the audience and telling them that Nia Sharma is inside the BB House.

Meanwhile, Nia makes her entry and greets the contestants after which she gives them a task in which they have to choose a housemate whom they think is the bad apple of BB House.

Nia makes her exit while Nishant Bhat tells Tejasswi Prakash that they will still be friends as Umar Riyaz comes there and argues with them.

Elsewhere, Devoleena (Devo) Bhattacharya gets upset with Pratik Sehejpal for considering her as the bad apple.

Further, Tejasswi gets confronted by a lot of housemates for saying that she is alone and everyone rebukes her as she tries to justify herself.

Salman greets the housemates and tells Tejasswi to not play the victim card.

Afterwards, he states the similarities between Shamita Shetty and Tejasswi to Karan and tells him how he downplays Tejasswi while praising Shamita.

He further reveals that it is Karan only due to whom she didn't win the ticket to finale task by not standing up for her when he could.

Salman asks Shamita why she argued with Tejasswi after losing and Shamita reveals that she thinks Tejasswi influenced Karan to not support her.

Later, Salman interrogates other housemates and reveals that Karan has himself stopped Shamita from winning without being influenced by them.

He again makes accurate points and reveals that Karan didn't stand up for Tejasswi, Shamita, and Nishant against Umar even after them being right.

In the end, Salman tells that he is doing wrong by hiding behind Umar's decision and should have supported his other friends at least once.

Salman questions Umar from when he doesn't like Tejasswi and he gives an excuse but Nishant reveals that Umar has had a problem with Tejasswi since the start of the show due to personal differences.

Salman asks Karan if he knew Umar and Rashmi Desai were supporting Shamita and he says that he didn't while Tejasswi says that she had known from the start.

Salman reprimands Abhijit Bichukle for degrading the quality of the show by talking such nasty things while he ignores Salman and goes to sleep in the bedroom area.

Later, Karan still blames Tejasswi for being shown as a bad boyfriend and goes to discuss it with Rashmi and Umar while Shamita talks with Tejasswi and sorts out their misunderstandings.

Meanwhile, Nia Sharma makes her entry in the BB set by dancing to her song 'Phoonk Le'.