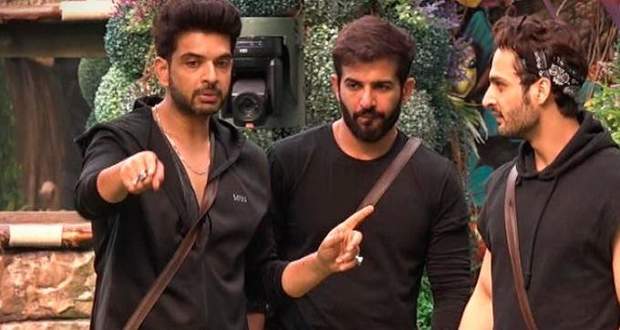 Shamita Shetty tells Arjun Bijlani and Vishal Kotian that she feels alone in the main house while they encourage her.

Further, Pratik Sehejpal tries to go to the jungle area and use the bathroom but Karan Kundra and other junglewasi stop him.

Meanwhile, Ieshaan Sehgaal flirts with Miesha Iyer while putting his head on her lap as other contestants tease them.

Elsewhere, Pratik manages to remove the lock from junglewasi's washroom after which Vidhi Pandya says that she was feeling uncomfortable as she was bathing when he broke the lock.

Karan and Vishal talk to the camera angrily to take action while Pratik tells everyone that they can do whatever they want.

Vidhi questions Pratik while he mockingly apologizes her making her even angrier.

Karan and others steal the mattresses from the main house and put them in their sleeping area while Afsana Khan refuses to use them making Karan argue with her.

Nishant Bhatt tries to justify Pratik's intentions while Karan tells him that he is being used by Pratik.

Later, Pratik tells Nishant that Karan is playing games with everyone while Afsana cries due to Karan's scolding.

Tejasswi Prakash reads from the Bigg Boss booklet that junglewasi's are given the authority to select their captain and that the captain can only be from one of the insiders that it Pratik, Shamita, and Nishant.

The junglewasi's vote for Shamita and she becomes the first captain of season 15.

© Copyright tellybest.com, 2020, 2021. All Rights Reserved. Unauthorized use and/or duplication of any material from tellybest.com without written permission is strictly prohibited.
Cached Saved on: Wednesday 13th of October 2021 12:12:06 PMCached Disp on: Thursday 21st of October 2021 09:21:24 PM