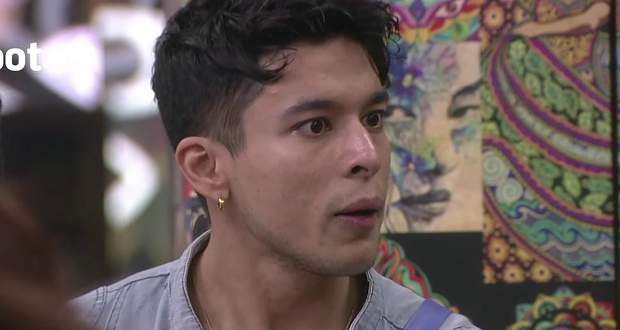 Karan Nath talks about Pratik Sehejpal's behaviour and intentions with the female contestants.

Later, Pratik, Moose Jattana, Neha Bhasin, Karan, Millind Gaba, and Akshara Singh talk about what would they would do if they could switch their connections.

Pratik and Ridhima Pandit are cooking while Divya Agarwal fights with him for space in the kitchen.

The boys explain to Divya that Pratik came after two hours of cooking but she doesn't understand.

Afterward, the contestants try to give out duties which again starts an argument with Divya and Pratik during which he calls her fake.

Moose later tells Pratik and Karan about how she can't seem to talk up a conversation with Zeeshan Khan.

At night, Bigg Boss announces that it is going to be their first live night in which they will have to entertain the audience once the buzzer starts.

Ridhima, Divya, and Shamita Shetty talk about Pratik in the bedroom area while others are in the garden area performing the task.

Later, Akshara tells that she will try to keep her distance from Moose as she keeps touching her as a joke.

Moose tells her that she was just joking and to not take her personally which makes Akshara emotional.

Pratik and others try to console her while Moose walks away with the excuse of being sleepy.