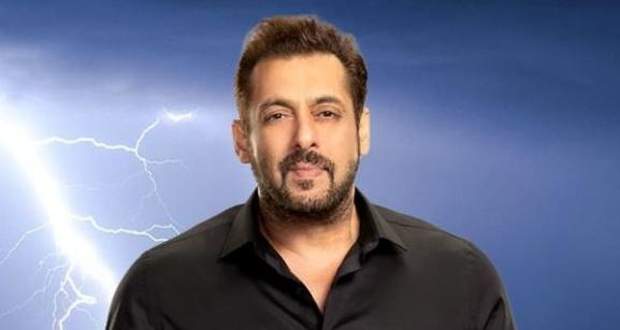 Today's Bigg Boss 15 9 October 2021 episode starts with Shamita Shetty distributing the tasks but Afsana Khan refuses to do the work of the main house saying that she does not use that area.

They both get into a huge argument after which Shamita complains to Karan Kundra while Nishant Bhat calms Afsana.

Later, Afsana hugs Vishal Kotian and then apologizes to Shamita.

Salman praises Vishal for keeping the audience informed by keeping them up to date and tells Tejasswi Prakshi to tell what happened in the past week in under two minutes.

Further, Salman shows a clip of the contestants fighting for the map and breaking the wooden door after which he questions Karan on his point of view regarding Pratik Sehejpal's anger.

Karan says that Pratik was being himself while Shamita tells Salman that Pratik might have felt scared to lose and started becoming negative.

Salman talks to Pratik regarding the bathroom lock removing incident and scolds him saying that Vidhi Pandya could have humiliated him if she had wanted.

He also brings up the incident where Meisha Iyer was changing in one of the bathrooms and he kept talking to her while sitting outside.

Salman tells Pratik that he should play the game by heart and use his common sense.

Salman tells Nishant it is being seen that he does not have his own opinion and keeps following Pratik's steps.

Further, Rakhi Sawant makes her entry in the disguise of a gorilla and entertains the audience.

She further shows the clips of certain contestants and points out her observations.

Rakhi flirts with the male contestants and acts of arguing with Tejasswi for trying to flirt with Bigg Boss.

Afterward, Salman makes Donal Bisht and Vidhi fight in a vocal and physical Dangal in which Vidhi wins.

Salman bids them goodbye and leaves after which Nishant consoles a crying Pratik while Vishal and others try to advise Donal.

Donal apologizes to everyone and gets emotional while others comfort her.

© Copyright tellybest.com, 2020, 2021. All Rights Reserved. Unauthorized use and/or duplication of any material from tellybest.com without written permission is strictly prohibited.
Cached Saved on: Saturday 6th of August 2022 11:39:20 AMCached Disp on: Thursday 11th of August 2022 05:33:32 AM