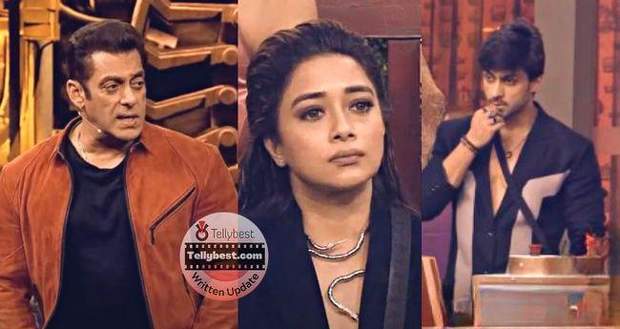 Today's Bigg Boss 16 10th December 2022 episode (day 71) starts with Salman Khan greeting all the housemates and the audience as he asks new wildcard contestant Vikkas if he is feeling settled or unsettled in the BB house.

Further, Salman tells Tina Datta to start off the task by revealing who is working in the media and who is not working in their eyes.

Ankit is not famous?

Many contestants take Ankit Gupta's name saying that he is not working since he does not want to play the tasks most of the time.

On the other hand, Abdu Rozik and Sajid Khan get the most vote for working in the media.

Soundarya Sharma also gets targeted while the wildcards support MC Stan and Shiv.

As the task ends, Salman tells the housemates to think while the screen goes blank.

Archana calls Nimrit 'Bichari' while Abdu argues with her saying that Nimrit is not at all Bichari.

Meanwhile, Sajid tells Priyanka Choudhary that he thinks it was done unfairly to Ankit.

On the set, Salman welcomes the season 13 contestant Shehnaaz Gill on the stage as she excitedly tells him that she is there to grill the contestants.

Shehnaaz Gill in the BB House!

Further, Shehnaaz Gill dances with Salman Khan and then has a lunch date with him in her own humorous style.

Salman talks about Shehnaaz's new song 'Sayani' where she rapped as she welcomes the winner of Hustle 2.0 MC Square on the stage with whom she had collaborated for the song.

Salman jokes that they also have an MC inside the house after which MC Square and Shehnaaz give a small performance of their new song.

Afterward, Shehnaaz and MC Square both enter the BB House and greet the housemates.

Housemates to get a roundhouse trip!

Further, Shehnaaz gives a task to the housemates and asks Ankit to sit on the rotating chair while asking Archana questions about it.

The chair will move if the answer to the question is yes.

Shehnaaz further tells the housemates that he has brought the poisonous water which will kill their bad habits and calls the contestants one by one.

Abdu calls Sumbul Touqeer and tells her that he wants to get rid of her bad habit of trying all the time.

Further, Soundarya also gets called many times with the reasoning that her heart is not as beautiful as her face.

Sumbul calls Archana onto the podium and tells her that she thinks no one is up to her level.

Sreejita gets showered with love!

Shehnaaz and MC Square bid goodbye while Salman greets the housemates once again.

He tells the contestants to choose who is 'Angaar' and who is 'Bhangaar' between the two new wildcard contestants.

Many contestants choose Sreejita De as Angaar for speaking more confidently except for Shalin Bhanot and Tina Datta.

MC Stan tries to throw the garbage on Vikas' head but fails as Salman says that MC Stan has woken up.

Afterward, Salman stays that it is time for elimination and takes MC Stan's name revealing that he is safe from elimination.

He also takes Nimrit's name and reveals that she is also safe.

Further, Salman reveals that there is a twist and tells Shalin to stand in front of the buzzer telling him that now Tina and Sumbul's fate is in his hand.

Salman tells Shalin that if he presses the buzzer, both Tina and Sumbul will be saved from elimination.

However, 25 lakhs from the prize money will be deducted making the winning amount null.

The housemates get worried as Salman tells Shalin that the person with the least votes from Tina and Sumbul will be eliminated if he does not press the buzzer.

Shalin gets worried as he tells Salman to stop who has already started doing the countdown.

Shalin does not press the buzzer and Salman takes Tina's name while telling her to bid her goodbyes and leave the house.

Tina starts hugging the contestants and leaves the house immediately without even saying goodbye to Shalin.

The housemates stand in shock and start consoling Shalin telling him that they did not expect it to be true.

Shalin also tries not to cry as he says that he could not let the money prize go.

Meanwhile, Archana dances around the garden and sings saying that she is happy the prize money did not get deducted.

Sumbul under fire once again!

On the other hand, Sumbul asks Sajid if she should console Shalin while Sajid complains that he knows she wants to mend her friendship with Shalin again.

Meanwhile, Shalin and Priyanka are sitting while Ankit comes there and tries to lighten the situation by telling Shalin to not get too close to Priyanka.

At the same time, Archana reveals that she removed ZeeZee from Tina's water bottle which Nimrit states that she did not like.

While eating dinner, Archana and Soundarya talk about how Tina's departure was unreasonable while Priyanka stands up for Tina.

Later, Shalin cries as he reveals that he has started missing Tina already and beats himself up for it while Priyanka and Ankit comfort him.

At night, Shalin walks towards the tunnel while Shiv and Sajid's whole group laugh at his antics saying that he is acting very poorly.

Shiv, Nimrit, and Sreejita go to him and console him while they laugh about it afterward saying that thwy were barely holding onto their laughter in front of Shalin.

© Copyright tellybest.com, 2022, 2023. All Rights Reserved. Unauthorized use and/or duplication of any material from tellybest.com without written permission is strictly prohibited.
Cached Saved on: Wednesday 25th of January 2023 02:22:21 PMCached Disp on: Wednesday 1st of February 2023 07:12:41 PM