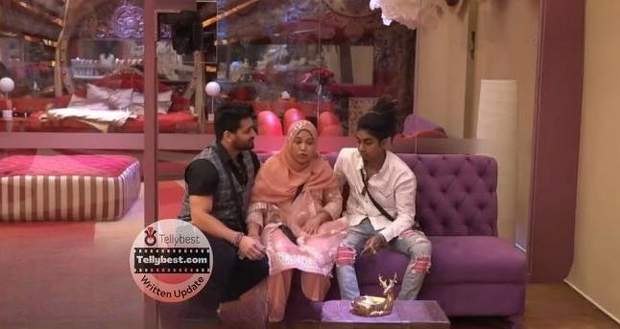 Bigg Boss asks him if he wants to dress up or not for Farah's birthday since she is his biggest critic.

However, Sajid argues that he is comfortable with what he is wearing.

Meanwhile, Archana Gautam makes food for Asha while she reveals that has not eaten anything made by anyone else for forty years.

Afterward, Sajid and Farah go inside the activity room while the rest of the housemates look on through the living area.

Bigg Boss announces that Sajid will take an interview with Farah on the occasion of her birthday.

Sajid starts the interview with his jokes and tells the audience that Farah is a man.

However, Farah turns the tables and asks him if he is a man which makes everyone laugh.

Further, Farah continues to bicker with Sajid saying that he needs to do an emotional interview.

They continue joking and making the audience laugh while talking about how Shiv Thakare, MC Stan and Abdu Rozik have become Sajid's family.

Farah jokes that she wants to take Abdu home while Sajid tells her that they should kidnap him.

Further, Bigg Boss thanks Farah and tells her that she has been with Bigg Boss for a long time and that today she is going to celebrate her birthday with the Bigg Boss family.

Afterward, the housemates sit and celebrate Farah's birthday after which they all sit in the garden area.

Just then, Bigg Boss freezes all the contestants and tells Farah that it is time for her to bid them goodbye.

Sajid tells Farah to wait for him to unfreeze while Bigg Boss starts unfreezing the contestants one by one.

Later, Abdu talks about him hoping that his sibling comes while Sajid and his Mandali joke about Sumbul Touqeer Khan's father coming inside and starting a fight with Shalin Bhanot and Tina Datta.

The next morning, Asha wakes up and asks Shalin about Shiv while he takes her to the room where Shiv is sleeping.

Asha jokes that she should let him sleep and tells Shalin that she checked out the whole Bigg Boss house.

Further, the sirens buzz and all the housemates start singing the BB Anthem along with dancing.

Later, Soundarya Sharma and Nimrit Kaur Ahluwalia argue with Tina and Priyanka Chahar Choudhary demanding that coffee should be distributed to 12 people even though only 8 people drink coffee regularly.

Priyanka tells her brother Yogesh to sit and see the drama as she goes to the kitchen and starts arguing with Soundarya that everything will be distributed, including her vegan food too.

Shalin Bhanot has a "Salman Dosha" In His Kundali

Afterward, Yogesh talks to Sumbul while Shalin jokes with Asha that he has Salman Dosh in his birth chart since he always gets Salman Khan.

Further, Asha sits with Shiv and gives him advice on how he should be real and interact will all the housemates.

All the housemates get emotional as they bid Asha goodbye while Yogesh continues to request Bigg Boss to unfreeze Priyanka.

Bigg Boss unfreezes Priyanka and both he and Asha leave while the housemates continue their daily dosage of drama and gossip.

Further, Bigg Boss freezes all the housemates once again and welcomes MC Stan's mother, Wahida into the BB House.

MC Stan unfreezes and rushes to hug his mother as they both go to the couch and talk.

Wahida talks about his fans supporting him all throughout the journey while he cries in her lap.

The housemates are unfrozen one by one while Wahida advises all of them to not fight about their family members.

Further, Archana apologizes and goes back to cooking while Bigg Boss freezes them again.

Bigg Boss asks the housemates who else have a complaint about Archana and tells them that her brother Gulshan is coming.

Archana cries while she continues saying that Gulshan must have stopped her mother since he wanted to come and find her.

However, the housemates stop her reminding her that their ration might get taken away.

Bigg Boss finally unfreezes Archana and she continues arguing with Gulshan while he tells her that her mother did not come since she was sick.

On the other hand, the Mandali including Wahida state that Archana and Gulshan are only joking.

Gulshan talks to all the members and makes them laugh while they all ask him about his life as a struggling actor.

Further, Nimrit's father Gurdeep also enters the house and greets all the housemates while telling Archana that she has taught her daughter how to cook.

Gurdeep talks to all the housemates and tells them how they are playing while he tells Shalin that Nimrit is right about him.

Further, Nimrit sits with her father and he asks her if she's feeling overwhelmed inside the house.

Nimrit tells him that she feels irritated sometimes but it is not too much.

Later, Bigg Boss announces the captaincy task and announces that the safe housemates (Priyanka, Shiv, Sajid, Shalin, Abdu, Soundarya, Archana, and Tina) will cosplay as chickens in the BB Farm while the nominated contestants will play as the caretakers who feed the chickens.

The contestant who gets the most seeds (balls) will get to remove two contestants from the task.

In the first round, Shiv wins the round and removes Soundarya and Tina from the captaincy race even after Soundarya is the third highest.

Bigg Boss announces that Tina and Soundarya are the coordinators for the task for the next three rounds.

© Copyright tellybest.com, 2022, 2023. All Rights Reserved. Unauthorized use and/or duplication of any material from tellybest.com without written permission is strictly prohibited.
Cached Saved on: Wednesday 25th of January 2023 10:07:01 AMCached Disp on: Monday 6th of February 2023 04:37:03 AM