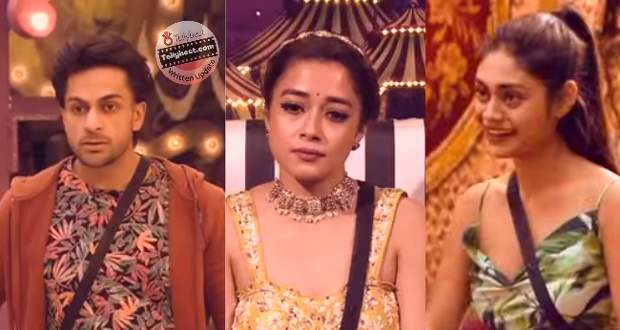 Today's Bigg Boss 16 11th December 2022 episode (day 72) starts with all the housemates waking up to the sirens as they gather in the garden to sing the BB Anthem.

Archana Gautam sits with Sajid Khan's group and tells them that she feels happy that Tina Datta has left the house.

Meanwhile, Shalin Bhanot gives Tina's ration to Vikas and tells him that he can take anything he wants from there.

Elsewhere, Nimrit Kaur Ahluwalia sits with Shiv Thakare and tells him that she is feeling negative vibes from MC Stan.

Later, Sreejita De tells Vikas to make room for her stuff in the storage area while he argues that she is not listening to him and creates an argument while Ankit Gupta tries to solve their problem.

Archana mocks Nimrit for complaining about the dishes while Nimrit comes after her and argues that she has no sense of hard work.

On the other hand, Shalin Bhanot tells Sreejita that he does not like Tina that much and won't even talk to her once he is out of the house.

Shalin laughs saying that he knew Tina would be going and says that he was friends with her only because she knew how to cook chicken.

Shalin tries to instigate Vikas against Soundarya and says she gave him the spilled coffee.

However, Vikas acts maturely and asks Shalin to move on as she herself drank half of it.

Meanwhile, Archana starts a new argument in the Bigg Boss 16 house, asking Ankit to read the rules of being a royal cook again.

She points fingers at Priyanka who made tea and did not even clean the shelf.

Sajid laughs as Ankit asks Archu to shut up while she keeps trying to prove her point along with Priyanka who says it is not her job.

In the bathroom, Vikas, and Shalin both chuckle as Vikas reminds him of the rose and takes Tina's name.

Shalin makes comments about Soundarya as she is talking with Vikas which angers her.

She tells him to keep his '40 Rupey ki Zabaan' to himself while he again makes comments on her expensive rings.

Afterward, Archana makes fun of Vikas for washing his clothes and later jokes with Soundarya that his wife did not wash his clothes for him.

Archana comes to Vikas and makes fun of his Kachha (underwear) while Priyanka Choudhary says, that out of all topics, he is discussing Kaccha with Archana.

Sajid and MC Stan make fun of Abdu Rozik as they tell him that they will wrap him with toilet paper for Nimrit's birthday and him having to dance to 'Baby Doll' song.

Later, Shiv Thakare talks with Abdu and asks him if he truly loves Nimrit.

Abdu says that he does have feelings for Nimrit but will think about anything more than friendship after leaving the BB16 House.

Shalin tries to impress a lady!

All the housemates are prancing in the garden while Bigg Boss makes an announcement that they will have a Zumba class every day for the next three days after the BB Anthem siren.

Shalin starts spraying perfume on his body while the Zumba instructor Sabina comes there and makes them dance and have fun.

Later, Sreejita reveals to Soundarya that Shalin called her a Sadist and said that she loved making Tina cry.

On the other hand, Stan is talking to Priyanka and Ankit telling them about how he got Booba's hand in marriage while Archana comes there saying that she has made a rap for him.

Afterward, Shalin tells Shiv about how much patience he has since he knows so many things about Soundarya but has not told them since her life would be ruined.

Tina Datta is back!

Later, Bigg Boss holds a meeting in the living room and shows Tina sitting in the confession room.

Bigg Boss tells Shalin to get behind the buzzer and tells him that he has again been put in a position to choose Tina or the money.

Shalin presses the buzzer and chooses Tina over money while saying that he will give money to whoever wins.

Bigg Boss judges Shalin and tells him that now everyone knows how Shalin is while reminding the housemates that the prize money has become zero now.

Tina enters the house and starts bombarding Shalin saying that she saw how he was dancing and behaving since the morning.

Shalin acts clueless while Tina asks him why he didn't press the buzzer previously when he knew she was going to get eliminated.

Shalin keeps on arguing that Tina wanted to leave the show herself while she asks him why he pressed the buzzer now then?

Later, Priyanka tries to clear their argument while Sajid and Shiv fight with her.

Sajid and Priyanka take Shalin to the washroom area and tell him to smoke a cigarette and clear his head while Shiv comes there and starts arguing with Priyanka again.

Soundarya comes and argues with Priyanka asking her why she is supporting Shalin while Sajid advises Shalin to come up with a reasonable explanation for why he pressed the buzzer to calm everybody.

Later, the housemates make groups of two-three contestants, and all bitch about Shalin while Sumbul tells Tina a fun thing to patch up her relationship with her.

Shalin acts foolishly clueless as he calls Tina aside and just sits while she asks him what he wants to talk to her about.

When he doesn't say anything, Tina leaves telling him to think and then call her.

Bigg Boss calls Shiv into the confession room and asks him what he thinks about Priyanka standing by Shalin's side when she was the one who called him an actor a few weeks back.

Shiv agrees saying that he questions the same thing while Bigg Boss manipulates Shiv into thinking that he is right by using the same words as Shiv and asking what his thoughts are on Priyanka supporting Shalin when he let go of the remaining 25 lakhs.

Shalin sits with Vikas to vent while Tina tells Stan that she does not understand why Priyanka became Shalin's best friend.

Later, Shalin finally sits with Tina while she questions him and exposes his whole game of wanting to look great in front of the housemates by letting her go first for the money and then pressing the buzzer afterward to look good in front of her.

Shalin asks her if she is really back as it was hard getting one contestant out while she tells him she may stay as a contestant and might have only come as a reality check for him.

At night, Shalin again creates an argument with Tina over the sleeping place.

On the other hand, Shiv, Sajid, and Sumbul wish Nimrit a happy birthday while Abdu comes out from the hidden place with 'Happy B'Day Nims' written on his chest while 'I love tatti' is written on his back.

Nimrit laughs reading it while Abdu figures it out and gets angry and lets it go seeing everyone laughing because of it.

© Copyright tellybest.com, 2022, 2023. All Rights Reserved. Unauthorized use and/or duplication of any material from tellybest.com without written permission is strictly prohibited.
Cached Saved on: Wednesday 25th of January 2023 11:31:29 AMCached Disp on: Sunday 5th of February 2023 04:22:58 AM