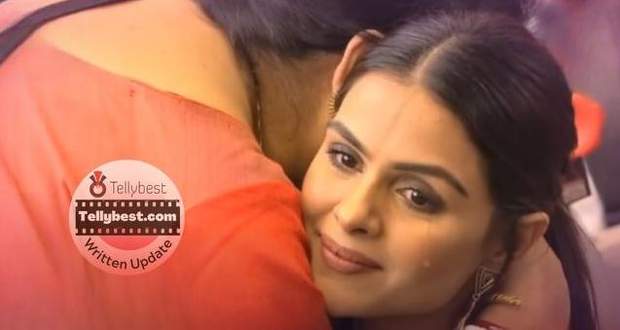 Bigg Boss asks Shiv whom he wants to disqualify from the race and Shiv chooses Abdu Rozik and Archana Gautam.

Archana fights with Sajid Khan who is not involving himself in the task.

Mandali's Politics Get Exposed Yet Again!

She says that Shiv is eliminating the people who are more involved while Sajid is not even playing.

The next round begins and Shiv wins again and hence eliminates Priyanka Chahar Choudhary & Shalin Bhanot from the race.

In the last round, Shiv and Sajid compete with each other leisurely.

Shiv wins again and thus becomes the captain of the house again.

Sajid takes Nimrit’s father aside, telling him to see that Mandali always wins.

Later on, Nimrit sits with her father on the terrace who schools her how to improve her game.

He tells her that Sajid had told Shiv that Nimrit will betray them one day and Shiv shared this with MC Stan.

Nimrit gets offended with her father when he asks her to make friends outside of the Mandali while maintaining her equation inside the Mandali as well.

He advises her to make good friends with Soundarya Sharma and asks her to give Soundarya a reason to support her.

Her father tells her that he can’t sugarcoat his words if she wants her success.

Angry, Nimrit walks away from there while Archana comes there and keeps company to Nimrit’s father.

She tells him that the main players Shiv and Sajid are playing their games while using Sumbul, Stan, Nimrit, and Abdu for votes.

Archana leaves as Nimrit comes back.

Nimrit lets out her frustration that her father expects so highly of her and considers her dumb.

Soundarya joins them and watches Nimrit arguing with her father while he tries to make her understand his point of view.

Soundarya tells Nimrit that her father is the best father and she is his best daughter.

Later in the early morning, the father-daughter patches up, and Nimrit lies down in his lap.

The morning arrives, and the sirens go off with the housemates coming to sing the Big Boss anthem.

Gulshan, Shiv, and Shalin have fun while singing the anthem and continue their fun even afterward in the gym area.

Archana sees Stan cleaning and comments that he is doing it as his mother is in the house today.

Later, Nimrit’s father goes to Shiv and tells him that he has advised Nimrit to play individually as the last month has arrived.

He advises the same for Shiv and tells him not to feel awkward if he sees a change in Nimrit’s behavior.

Bigg Boss freezes everybody and asks MC Stan’s mother, Nimrit’s father, and Gulshan to bid their goodbyes to the housemates.

Bigg Boss plays with Archana by not releasing her to hug her brother for the last time while Shiv and Shalin copy Archana’s crying.

At last, Bigg Boss allows Archana to hug Gulshan, and the three leave the house while Shiv and Shalin cry dramatically about Gulshan’s departure as they were the ones having fun the most.

The housemates resume their routine and Bigg Boss freezes them again as they announce the arrival of Tina’s mother, Mrs. Madhumati Datta.

She hugs Sreejita De from behind, assuming her to be her daughter Tina, however, realizes her mistake and looks for Tina in the house.

Shalin is shit scared of interacting with Tina’s mother while Shiv teases him. Shalin requests Shiv to not make fun of this situation till the time Tina’s mother is in the house.

Madhumati meets Tina and showers her motherly love with her hugs and kisses.

She also hugs Priyanka for having Tina’s back in her tough time while a teardrop escapes from Priyanka’s eye.

Tina subtly asks her mother to not scold Shalin when she goes to meet everybody in the house.

At first, Shalin leaves saying he doesn't want to interact but later goes to greet Madhumati Ji who blesses him politely.

Madhumati Ji tells Shalin that there was no fight between her and his mother. The news is fake.

Shalin sighs in relief and has a small talk with her.

Everybody sits around Madhumati Ji and chit-chats with her when Bigg Boss freezes them and welcomes Shalin's mother Sunita Ji into the house.

Sunita Ji enters the house with her sweet presence and meets her son with love and affection in her eyes.

One by one she meets everyone in the house while Tina is worried about any drama happening with her and Shalin's mothers in the house together.

Madhumati Ji tells Tina that she is Tina's mother and Tina is her daughter and then asks Tina to not try being her mother.

Shalin's mother comes there with her positive persona and greets everyone.

Both mothers laugh off at the news of them fighting each other before coming into the house.

Later, Madhumati Ji tells Tina that Shalin doesn't love her and she should not waste her tears over him.

Meanwhile, Sumbul goes to give cake to Sunita Ji who was telling Shalin about the scene that happened with Sumbul's father.

As Sumbul enters the room, Sunita Ji nicely talks to her while mentioning that they met her father outside once or twice.

Shalin jumps in and says that Sumbul's father has abused him in the media while his mother silences him from starting another controversy.

She pacifies Sumbul that it was nothing major and everything is fine.

Sumbul gets worried for her father and tells Sajid that there is a reason why her father is not coming into the house.

Further on, Bigg Boss sends "Just Sul" into the house as Abdu's close friend and everybody greets him.

Abdu becomes happy and asks Just Sul if he talked to Abdu's father before coming.

Meanwhile, Sunita Ji is telling Shalin to better his game with Priyanka's support and leave Tina who is negatively impacting his image.

Shalin tells her that he genuinely felt that Tina had feelings for him while his mother sadly asks how he can be so innocent.

Bigg Boss interrupts their talk asking Shalin to bring everybody into the living area.

After everybody gathers there, Bigg Boss shows a video message from Abdu's father who couldn't come to meet Abdu.

Further, Bigg Boss calls Abdu and Sajid into the confession room where talks to his friend on a video call.

Sajid gets stunned to see Abdu's house in Dubai as his friend wanders in the house while talking.

Abdu's friend shows Abdu the surprise they are having for him which is a big swimming pool inside the house.

At night, Madhumati is sitting with Tina in Tina's room with Shiv, Nimrit, and Soundarya joining them.

Madhumati boldly chides Tina for going to the bathroom to cry while the other go into a fit of laughter seeing the boldness.

On the other hand, Sunita Ji and Shalin are talking about Tina. Sunita Ji asks Shalin if he really did not understand that the feelings from Tina's side are fake.

Meanwhile, Sajid tells the Mandali that Sunita Ji is really sweet and he feels like sitting at her foot and keep talking to her.

Is Tina The Real Culprit Behind Shalin-Sumbul Controversy?

Later at night, Sunita Ji sits with Sumbul and tells her that in the beginning, the brother-sister equation with Shalin was going nicely.

At the same time, Shalin comes there.

He says that his mother did not say anything about anyone else but Tina and that his relationship with Sumbul went down the hill because of Tina only.