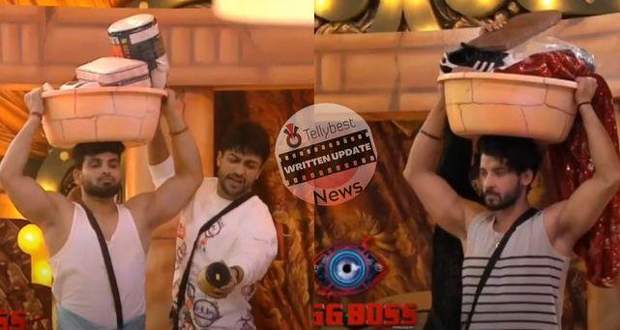 Today's Bigg Boss 16 11th October 2022 episode (Day 09) starts with Gautam Vig giving the duties to everyone while Shalin Bhanot refuses to do anything after still being salty about the recent argument.

Later at night, Soundarya Sharma complains to Gautam about how Archana Gautam dragged her entire family and disrespected her which is not right.

Nimrit & Sreejita team up to make Shalin and Tina "break up"

Afterward, Nimrit Kaur Ahluwalia and Sreejita De are planning how to break the friendship of Shalin and Tina Datta's group.

On the other hand, Gautam tells Soundarya how he doesn't like her being too close to other guys and do jokes like kissing.

However, Soundarya makes it clear to him that they are only in the process of being friends right now and that she would do things according to his liking only if she's his girlfriend.

Day 10 starts with the contestants playing with Abdu Rozik and trying to lighten up their moods after the previous night's drama.

Nimrit plays with Abdu saying that he should not betray her or else she will not come with him to Tazakistan and marry him.

Afterward, Shalin and Tina are joking with Soundarya while she goes to Gautam and tells him about it while trying to convince him to not get poked.

However, Gautam tells Soundarya that he knows Shalin's intentions are not right and that he wants her to be stern with Shalin from now on.

At the same time, Gori Nagori asks for another portion of food from Sreejita which irritates her as there are eleven more people there who haven't eaten yet.

Further, Gori comes where Sumbul Touqueer and Sreejita are cooking and wipes her hands which makes them angry.

All three start arguing while MC Stan supports Gori even though she is wrong.

Gori speaks disrespectfully while showing her tongue to Sreejita and Sumbul which leads to Sreejita commenting that the surrounding in which the people grow up is important too.

Gori does a little dance and shows her arse to Sreejita and Sumbul while telling them that it is not right of them to discriminate against her based on how she grew up.

Nimrit and Gautam try to explain the situation to MC Stan but he accuses them of calling her Gawar.

Gautam hears both sides and tries to calm the situation but Gori keeps instigating them.

Gori further says that she didn't target Sumbul to instigate her.

Tina and Shalin hold back Sumbul who states that she will need only a minute to shut her up.

In the end, Gautam declares that no one will eat food until all food is cooked.

Later, Bigg Boss calls Gautam into the confession room and tells him to give the names of four contestants whom he thinks are responsible for the discriminating words and put them into elimination.

Gautam chooses Gori, Stan, Sreejita, and Tina whom Bigg Boss announces that there are in the nomination for elimination this week.

Tina gets surprised and thinks that there are other people whose names could have been taken and talks to Gautam about it.

Shalin holds hands with both Sumbul and Tina while Tina cries that Sreejita is bad luck for her.

Abdu is called into the medical room for his treatment while Sajid Khan goes with him and jokes to comfort him.

Afterward, Bigg Boss tells Gori, Stan, Sreejita, and Tina to distribute the ration based on room and make sure that only the contestants of the given room eat their ration.

Sreejita and Tina argue over coffee while Nimrit and Archana fight over who will marry Abdu between them.

Gautam is again instigated by Gori and he tells her to shut her mouth.

Meanwhile, Archana hurdles the kitchen and delays the dinner cooking angering many housemates.

Priyanka Choudhary argues as her room didn't get any flour while Nimrit and Gautam reveal that it was Gori's decision.

At night, Ankit Gupta points out to Gautam that Gori stole the flour from room number 4 and Gautam confronts her while she says that she doesn't know what stealing is.

Abdu teases Stan over his budding relationship with Soundarya Sharma

On the other side of the house, Soundarya and MC Stan are talking while Abdu comes there and teases them saying that they are having a romantic time together.

© Copyright tellybest.com, 2022, 2023. All Rights Reserved. Unauthorized use and/or duplication of any material from tellybest.com without written permission is strictly prohibited.
Cached Saved on: Monday 21st of November 2022 05:04:18 AMCached Disp on: Thursday 1st of December 2022 02:08:15 AM