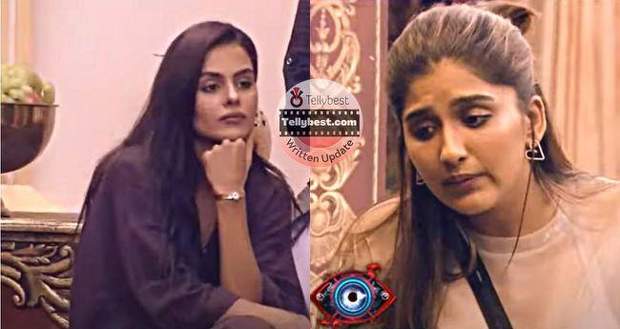 Today's Bigg Boss 16 12th December 2022 episode (day 73) starts with all the housemates waiting for Sreejita De to be done with cooking so that they can have dinner.

Ankit Gupta requests Soundarya Sharma and Archana Gautam to cook the breakfast but they refuse.

Meanwhile, Vikkas Maniktala tells Sreejita to do it fast since he has to eat his medicines too.

Archana sees that Sreejita has not cut the Bhindi properly and jokes in front of everyone while laughing like a maniac saying that there are bugs in it.

Later, Archana teases Vikkas who is eating Bhindi and Sreejita participates which angers him as he tells them to be sensible and let him eat peacefully.

#PriyAnkit fight and patch up!

The next day starts& all the housemates wake up to the siren and get excited to do Zumba with the Zumba instructor Sabina.

Afterward, Ankit gets angry at Priyanka Choudhary for talking rudely to him which she says that it is just the way she talks and tells him that scolding people is her love language.

Abdu to get a reality check?

Meanwhile, Sajid Khan and MC Stan sit down with Nimrit Kaur Ahluwalia and tell her that she has to tell Abdu Rozik clearly that they can't be anything more than just friends as he is already planning to propose to her once they get out of the house.

Ankit apologizes to Priyanka and patches up with her while the argument between Tina Datta and Shalin Bhanot goes on.

Archana tells Tina to give some bread to Abdu but she refuses since she is already giving her bread to Stan.

Shiv Thakare and Stan joke that bread has exposed everyone's true colors after which they go to the exit tunnel and mock Shalin by imitating his actions.

Later, Bigg Boss tells the housemates to stand in a line in the garden.

Bigg Boss tells Shalin, Tina, Soundarya, Priyanka, and, Sumbul to stay in the giant chair in their desired position.

Afterward, Bigg reveals that there will be three captains for the new week who will take care of the house together.

For the task, there will be five rounds and at the end of each round, one contestant will make a portrait of the three contestants they want to make the captain.

However, the next contestant can either rip the portrait and make a new portrait of the three housemates they want or support the decision of the previous contestant by decorating the portrait.

A fight-off between Nimrit and Ankit!

Archana goes in the first round and selects Shalin, Priyanka, and Soundarya while Tina and Sumbul get upset by her decision.

Nimrit and Ankit argue as they want to go last and make the final decision.

Abdu goes in the second round and selects Shalin, Tina, and Sumbul.

At the same time, Nimrit tells Sajid to not fight with her because he wants to support Ankit while Sajid manipulates her emotionally by saying that he wants to participate in the task

Sreejita goes third while Nimrit and Sajid resort to toss to decide who will go last.

Nimrit wins the toss while Priyanka tells her to speak loudly and not whisper like thieves.

Nimrit tells Priyanka that she does not want her to become a captain and smiles at her while Ankit tries to convince Sajid to make Priyanka one of the captains.

Sreejita selects Soundarya, Priyanka, and Shalin while Shiv selects Shalin, Tina, and Sumbul while everyone laughs in the fourth round.

Meanwhile, Nimrit and Sajid act of arguing with each other in front of Ankit so that they can make their desired contestants captain.

Nimrit starts making the portrait while Ankit argues with her and Archana tears the paper saying that she is not chosen by the majority.

Ankit argues with Sajid who keeps saying that Nimrit asked for it as a birthday gift.

In the last round, Nimrit selects Tina, Sumbul, and Soundarya who become the new captains of the house.

Ankit stands up for Priyanka!

Priyanka tells Ankit that she is happy he took a stand for her while Bigg Boss jokes saying that Ankit's day is made after Priyanka praised him.

At night, Tina gets happy about becoming a captain while Shalin bitches about her saying that he feels betrayed.

On the other hand, Ankit tells Sajid that he has been wronged since he stood up for himself for the first time and was not considered by his own group.

Afterward, Sajid sits with his group and tells Nimrit that his preference was Priyanka but she did not choose her and instead chose Tina because of her personal enmity.

Later, Sajid takes Shiv aside and tells him that he did not want to participate in the task but wanted to expose Nimrit's double-sidedness.

Shalin goes to Sumbul and talks to her about the room changing and requests she keeps him in room 6 only.

Sajid, Shiv, and Stan argue with Sumbul afterward telling her that they will not tell her anything about whether to talk to Shalin or not anymore.

Sumbul starts crying and emotionally traps the three into apologizing for scolding her.

Sajid goes to Shalin afterward and talks to him about Sumbul but it is revealed that Sumbul is the one who initiated the advances for their friendship the second time.

© Copyright tellybest.com, 2022, 2023. All Rights Reserved. Unauthorized use and/or duplication of any material from tellybest.com without written permission is strictly prohibited.
Cached Saved on: Thursday 26th of January 2023 07:15:08 AMCached Disp on: Sunday 5th of February 2023 03:15:02 AM