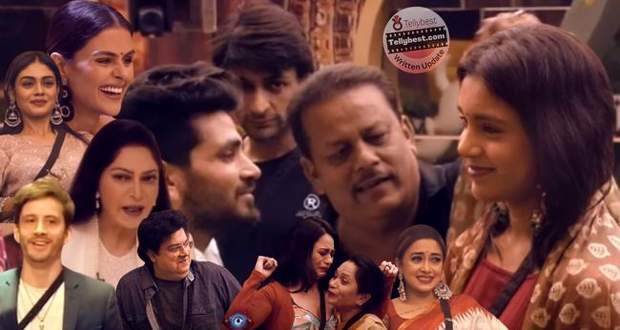 Today's Bigg Boss 16 12th January 2023 episode (day 104) starts with all the housemates forming a row in the garden and singing the BB Anthem.

Further, Shalin Bhanot talks to Tina's mother and apologizes for not talking to her while she tells him that she understands.

However, Shalin's mother tells him afterward that she did not like him talking to Tina's mother.

Afterward, Abdu Rozik gets out of the shower and is in his orange towel while Bigg Boss freezes him.

The housemates make fun of him while Shiv Thakare tells him that he should show his abs like Shalin.

Bigg Boss freezes everyone and tells Tina and Shalin's mothers & Just Sul that it is time for them to bid the housemates goodbye.

Soundarya starts crying while Sajid Khan tells her to not move for the sake of the ration.

Soundarya's emotional reunion with her mother!

Bigg Boss also teases Soundarya by keeping her frozen and releasing her at last.

He jokes with all the housemates while Sumbul keeps on standing like a statue.

Lastly, the housemates prepare for the entry of Sreejita De's fiancee, Michael while Bigg Boss freezes them all midway.

Afterward, Michael enters the house while the housemates get fascinated seeing his 6' 4 height.

Archana Gautam goes to Soundarya and Usha while joking that Sreejita and Michael's kids will be very fair.

Later, Sumbul acts childish while Sajid gets upset and tells Iqbaal that she is acting like a child even though he has told her otherwise many times.

However, Iqbaal tells him that Sumbul is a teenager and she should act like the one which is why she has been selected for the show which offends Sajid.

Sajid mockingly apologizes to Sumbul and leaves while Shiv, MC Stan, Abdu, and Nimrit tell Sumbul that she should stand up for herself to Sajid so that he also learns where he is wrong.

Shiv goes to check up on Sajid but he tells them to not talk to him while Iqbaal continues talking about the views of the audience about Nimrit's birthday incident and other incidents where Sajid was crossing his boundaries.

On the other hand, Michael sits beside Archana who gets shy.

She reveals to the girls that she had a fantasy of talking to a foreigner.

Sreejita translates it for Michael who scoots closer to Archana to talk to her.

Archana further gossips about Sreejita giving head massages to Abdu and others.

Later, Bigg Boss tells all the housemates to go into the activity room while the VVIPs will stay inside the house.

The housemates get surprised to see Simmi Grewal while she tells them that she is happy to see everyone.

Further, Simmy asks the housemates what they would choose between the two things such as fame and career or unconditional love and the perfect partner.

Simmy jokes with Shalin and asks him what he would choose between Tina and Chicken.

Shalin says that he would choose anything other than Tina while Simmy tells him that she thinks he is very charming.

Further, Simmy asks the housemates what they have learned from the show and what are their aims.

Simmy congratulates all the housemates as she says that she knows the winner is amongst one of them.

Priyanka Chahar Choudhary and Tina Datta argue that the ration has been resent which is why it has the housemate's names on it but in reality, all the ration is common ration.

Shalin tells the housemates to realize that Tina was faking the whole time while Tina tells him to not start his drama.

Later, Shalin and Priyanka gossip about all the housemates while Shiv and Abdu play with each other and spray on each other.

At night, Nimrit hugs Usha and talks to Soundarya about how she has been noticing that Archana has gotten insecure ever since Gulshan told her about Soundarya-Nimrit's bond.