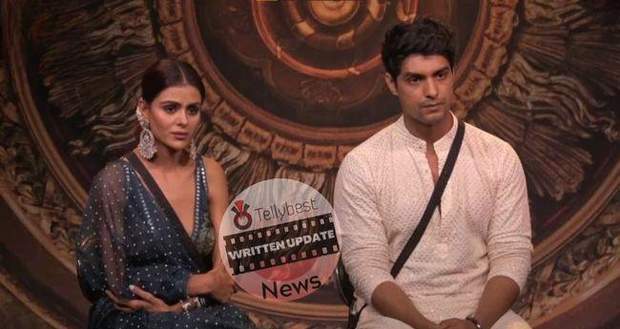 Today's Bigg Boss 16 12th November 2022 episode (day 43) starts with Salman Khan greeting the audience and stating that they will get to the eliminations right away.

Salman further greets the housemates and asks Ankit Gupta and Priyanka Choudhary if they have understood what he said.

Salman talks about the topic of elimination and tells them he warned them while stating that Priyanka is eliminated.

Priyanka gets emotional as she tries to bid all the contestants goodbye happily and hopes for the best.

Ankit and Soundarya Sharma try to convince themselves that it is just a prank but the door does not open.

Salman asks Gori Nagori if she wants to leave and Gori happily nods her head as Salman laughs.

Salman tells Gori to come out of the house while telling Ankit that this stunt was to teach him and Priyanka a lesson.

Afterward, Priyanka cries to Ankit and tells him that she is being portrayed badly because of him.

Further, Priyanka and Ankit go to Sajid Khan who advises them that they should give space to each other to improve both their relationship and their game.

Meanwhile, Salman Khan welcomes Varun Dhawan and Kriti Sanon on the stage as they both fight over the title of Salman's biggest fan.

Salman tells them that they can solve the situation by having a competition between them and whoever gives the most correct answers will win.

Further, the guests go into the Bigg Boss house and greet the contestants who welcome them happily.

The guests greet them while Varun and Kriti say that they have a task for them.

Gossips to make crack in relationships

Tina's gossip is revealed which makes a lot of contestants turn toward her including Shalin Bhanot.

Meanwhile, Salman talks to Archana Gautam through a video call and asks her opinion on if what she did was correct or not.

Archana apologizes to Salman while she begs for a second chance.

However, Salman tells her that she showed her weakness to Shiv Thakare and even expected Bigg Boss to forgive her for breaking the most important rule of the house.

Salman further greets the housemates and tells them that they are going about yesterday's events.

Salman mocks Nimrit as she fails to give the correct explanation of the 'Open and Shut' case.

Further, Shalin explains the term, and moving ahead Salman asks Tina to explain the incident when Archana choked Shiv.

Later, Salman shows the clip where Shiv is telling Tina and other group members about Archana's trigger point which is 'Didi'.

The moment when Shiv Thakare and MC Stan fist bump after provoking Archana Gautam is also shown by Salman Khan.

Salman tells the entire story behind the incident to the contestants.

Meanwhile, Archana keeps crying in the activity room from where she watches Salman talking to Shiv and others.

Salman Khan repeats the rule of Bigg Boss which states that the contestants cannot bring up any topic that relates to a person from outside the Bigg Boss house to provoke him/her.

Further, Salman asks the contestants if they want Archana back in the house to which 6 people agreed and 5 disagreed.

Priyanka and Soundarya get overly excited when Salman announces Archana's comeback in the house.

Sajid Khan gets upset with Archana Gautam coming back to the house for which he starts arguing with Priyanka, Ankit, and Soundarya who are supporting her.

The argument turns into a big fight as none of the sides resolve to set back.

Priyanka says if Archana broke the rule she was evicted and now Shiv has broken the rule he should also get evicted when Sajid says Archana's come back is not right.

© Copyright tellybest.com, 2022, 2023. All Rights Reserved. Unauthorized use and/or duplication of any material from tellybest.com without written permission is strictly prohibited.
Cached Saved on: Monday 21st of November 2022 01:00:35 AMCached Disp on: Friday 9th of December 2022 05:19:06 AM