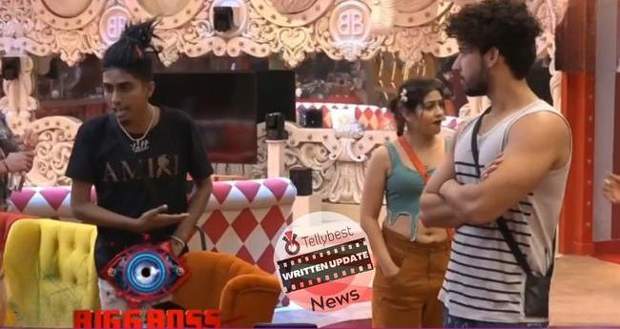 Today's Bigg Boss 16 12th October 2022 episode (Day 12) starts with all the housemates waking up to the siren and gathering in the garden to sing the Bigg Boss anthem.

Archana Gautam and Sreejita De get into an argument as Archana asks for coffee when she doesn't even drink it.

However, Sreejita gives her a sharp reply and leaves from there stating that she has done the distribution fairly.

On the other hand, Shalin Bhanot runs after Tina Datta and tells her that he would not like to pursue a relationship inside the house but promises to never hurt her.

Later, Shalin walks with Gautam Vig and talks to him about his jittery feelings for Tina and how he can't stop smiling when he's around her.

Gautam gives him advice to not suppress his feelings and talk out the confusion happening with Sumbul Touqueer's feelings too.

At the same time, Shiv Thakare and others prank Abdu Rozik by putting on masks on their face.

Further, Soundarya Sharma tries to spend some time with Gautam by asking him to help her with the weights but he refuses.

However, Shalin comes forward and helps Soundarya with the weights.

Afterward, Gautam and Tina pull Shalin's leg by sitting close to each other and talking as if they are lovers.

In the confession room, Bigg Boss reprimands Gautam telling him that there is nothing extra being sent for anyone regardless of their preference.

Bigg Boss further tells him that the food for each room will be cooked differently based on the ingredients they give.

Gautam goes outside and retells the new information to the contestants and states that they can come to him if they have any problems.

Later, the contestants are shown a clip of Abdu's music video of the song 'Chota Bhaijaan' and tell them that the song is going to be used in today's task.

Bigg Boss instructs Nimrit Kaur Ahluwalia and Priyanka Choudhary that they will have to direct a music video of Abdu using the BB House, Abdu, and the contestants under two hours.

The contestant with the better music video will get a special privilege and the contestants get to work while Archana fights that she didn't get her dinner on time.

A crack in MC Stan and Archana's friendship

Archana states that she has courage but MC Stan doesn't agree and they start arguing which turns huge.

MC Stan tells her to stay like a girl while Archana says that she is a lioness.

Soundarya and Gori Nagori support MC Stan while other contestants including Abdu calm her.

Later, Abdu goes to MC and manages to put a smile on his face while everyone calls him cute.

Afterward, Bigg Boss announces that it is time to see the music videos directed by Nimrit and Priyanka.

Priyanka Choudhary wins the task! With a special privilege!

In the end, Bigg Boss tells contestants to discuss among themselves and decide who is the winner.

As the result, Priyanka wins the task and gets the privilege to change the sleeping and room arrangements with the condition that the ingredients will stay in the allotted rooms only regardless of the contestants staying in them.

Afterward, Priyanka allotted the room with her own things keeping them in consideration and Bigg Boss calls her into the confession room to ask her reason for putting certain people together.

Shalin says I Love You Tina!

Shalin tries to talk seriously with Tina but she keeps parroting him.

Further, Shalin tells her I Love You to shut her up.

A shocking prank of Shalin Bhanot

On the other hand, Gautam and Soundarya talk about Shalin's bipolar personality and if he's acting or not.

Later into the night, Tina, Sumbul, and Archana prank Shalin and scare him awake from his sleep.

© Copyright tellybest.com, 2022, 2023. All Rights Reserved. Unauthorized use and/or duplication of any material from tellybest.com without written permission is strictly prohibited.
Cached Saved on: Monday 21st of November 2022 06:14:38 AMCached Disp on: Thursday 1st of December 2022 01:06:34 PM