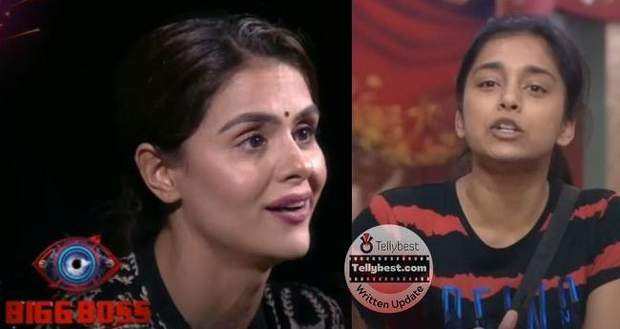 Today's Bigg Boss 16 13th December 2022 episode (day 74) starts with all the housemates waking up to the sound of the sirens and rushing to the garden excited for their Zumba class.

However, Sajid Khan and MC Stan keep on standing in the kitchen and drinking their coffee.

Sumbul Touqeer tells Soundarya Sharma that others are making their own things when Nimrit Kaur Ahluwalia has been assigned to do the breakfast.

Meanwhile, Archana Gautam lies on the bed in the garden area and is joking with Tina Dutta and Vikkas Manaktala.

Sumbul comes there and tells her to not sleep while Archana stands up and goes to the kitchen to make her tea.

Sumbul tells her that she cannot make her tea and has to tell Nimrit.

Archana and Sumbul argue with each other while Nimrit leaves saying that the breakfast will not be made before two hours.

Shalin Bhanot goes around the house telling the contestants that Nimrit refuses to make breakfast for him for two hours.

However, Nimrit apologizes to Shalin saying that she is worked up.

After, Shalin comes to Vikas and vents about the lack of reactions and actions after Tina came back.

Later, Bigg Boss calls a meeting in the living room and the housemates get shocked to see a buzzer.

Bigg Boss tells the housemates that the buzzer is for the captains of the house and tells the three captains that they will have to race to press the buzzer after each signal from the Bigg Boss.

The captain pressing the buzzer first will get an advantage in the upcoming task while the remaining two will have to play as normal contestants.

Soundarya Sharma Is Safe From The Nominations Today!

The three captains keep on standing near the buzzer but Archana calls them to the kitchen stating that she needs help.

The signal is heard and Soundarya Sharma presses the buzzer first getting the advantage of safety from the nominations.

Bigg Boss calls all the contestants into the activity room and stands behind the buzzer stand.

Archana presses the buzzer for Sumbul but she does not get nominated since it is only one buzzer instead of three.

Bigg Boss reveals that Soundarya has the privilege to save three people of her choice from nominations but she does not save Shiv.

Priyanka goes next and Sajid Khan, Shiv, Sumbul, MC Stan, and Nimrit press for her while Ankit argues that the 'Mandali' came together again.

Nimrit is the real "Paltan!"

Stan and Ankit get into an argument while Stan asks him what she is to him and that he is standing up for her.

However, Soundarya saves Priyanka using her privilege after which Nimrit comes to stand on the box.

Ankit, Priyanka, Archana, and Vikas press the buzzer for Nimrit.

Ankit keeps on saying that Nimrit did an injustice to Sajid by not letting him participate in the task.

Sumbul and Priyanka get into an intense argument while Soundarya again saves Nimrit from getting eliminated.

For Tina, Sreejita De, Sajid, and Archana press the buzzer for her and get Tina eliminated.

Shalin gets on the box and Sajid, Shiv, Stan, Nimrit, Sumbul, and Archana press for him putting Shalin in nomination for elimination.

For MC Stan, no one presses, and Stan laughs saying that they got scared of his fans.

The Mandali Head, Sajid, Gets Nominated

Sajid goes afterward and Shalin, Tina, and Archana press the buzzer for him putting him in the nomination.

Again, the whole Sajid 'Mandali' including Archana and Tina presses the buzzer for Ankit and tries to put him in nomination but Soundarya saves him using her special privilege.

The task ends and Bigg Boss announces that Shalin, Shiv, Tina, and Sajid are in nomination for elimination.

Shalin goes around the house trying to instigate an argument against Tina.

Meanwhile, Sreejita asks Stan if he said "Mein Uss Ladki Se Baat Nahi Karta" for Priyanka and he says yes while explaining his whole reasoning for using the word.

On the other hand, Shalin tells Tina about the recent drama with Sumbul and she tells him that no one believed her when she said the same thing about Sumbul.

Later, Stan gets angry at Sreejita for judging him while Shalin tries to convince Tina to talk to him since he is missing their bond.

© Copyright tellybest.com, 2022, 2023. All Rights Reserved. Unauthorized use and/or duplication of any material from tellybest.com without written permission is strictly prohibited.
Cached Saved on: Wednesday 25th of January 2023 03:28:18 PMCached Disp on: Sunday 5th of February 2023 02:29:08 AM