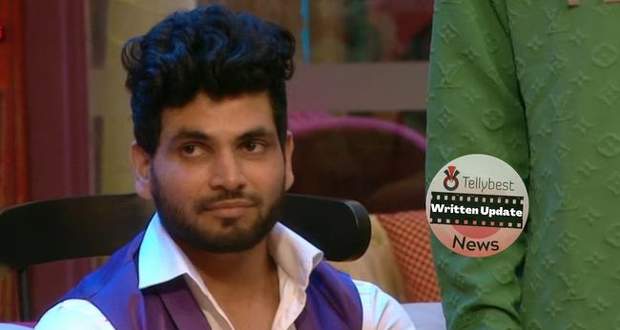 Just then, Sajid Khan comes there and tells them that they should not support violence.

Meanwhile, Tina Datta and Shalin Bhanot question Sumbul Toqueer as to why she got aggressive.

MC Stan goes to Shiv Thakare and updates him on the argument between Sajid and Ankit Gupta-Priyanka.

The fight gets intense between Sajid and Priyanka-Ankit while MC Stan and Shalin come to support Sajid.

Tina goes to Shiv and explains to him that Salman told him to not talk about the things that are not regarding the BB House.

Tina also says that she does not understand why Archana's violence is justified.

Gautam Vig starts arguing with Ankit while Sajid still argues with Priyanka and tries to justify himself.

Sajid says that he's not defending Shiv while Priyanka, Gautam, Soundarya, and Ankit try to explain things to him calmly.

Sajid goes to Shiv next and tells him that he should not have agreed to let Archana be back in the house as he is contradicting himself now.

Meanwhile, Sumbul goes to Ankit, Priyanka, and Soundarya and she tells them that she understands their point of view now.

Archana returns and surprises Soundarya and Priyanka who hug her and cry tears of happiness.

Archana further goes to Shiv and apologizes to him including everyone who is against her violence.

Sajid advises Archana to not become violent and use her charms to make everyone laugh.

At night, Gautam asks Archana if she promised Shiv that she will never nominate him.

Archana laughs as she says that she did not say anything like that.

Further, they talk about planning to get Abdu Rozik on their team.

Archana reveals that she thinks it was Nimrit Kaur Ahluwalia, Tina, and Sajid's plan to get her out of the house.

The next morning, all the contestants wake up with enthusiasm while Abdu tells them all to make breakfast fast as he is very hungry.

Meanwhile, all the ladies of the house are busy getting ready for the day.

Tina makes Shalin Bhanot help her put on her bracelet and hugs him as a reward.

Later, Archana listens to the housemates from the other group telling her that she has changed.

She goes to her friends and tells them she is going to do action directly and will not speak to them.

Just then, Bigg Boss calls out to Shalin, Stan, Sumbul, and Tina and announces that no more cigarettes will be given as a punishment.

All four come out of the bathroom and apologize to the cameras while Priyanka's friend group starts mocking them.

Shalin and Gautam get into an intense argument as they start swearing at each other.

Priyanka and her team start making fun of them and having fun while Stan starts arguing with her to pass his time.

Afterward, three child artists come inside the house as Shalin, Priyanka, and Ankit.

The children start acting like the designated contestants and start shouting at each other while the housemates get entertained.

Shekhar Suman makes his appearance once again with his Big Bulletin and dubs the Bigg Boss house as a school with the contestants as the students and Bigg Boss as the principal.

Further, Shekhar recites beautiful poetry on how all the contestants of the Bigg Boss House are like children.

Shekhar shows baby pictures of the contestants and tells them to guess who it is while giving small comments on each one of them.

Shekhar asks Ankit who he thinks is a puppet and a ring person of the puppet inside the house.

Ankit says that Stan is a puppet while Shiv is the one who is playing him.

Further, Nimrit chooses Gautam to be directionless and comments on him while Shalin jumps in and starts taunting Gautam.

However, Gautam stands up for himself and starts talking back to him.

Shiv gives the title of 'Paapi Gudiya' (Sinful Doll) to Priyanka while everyone just laughs about it.

Further, Nimrit comes into the confession room and asks Bigg Boss if the conversation will stay between them.

Bigg Boss assures her while she starts crying and has a breakdown.

Later, Bigg Boss calls Priyanka and Ankit into the confession room and reminds them to not take Salman's word and taunt other people when they are specifically told to not talk about the topic further.

Tina asks Stan why Shiv is talking to Archana and Gautam while Stan tries to justify him by stating that Shiv includes them only in fun things and leaves afterward.

Meanwhile, Nimrit tells Bigg Boss that she is feeling her mind being clattered and asks if she can cry for some time.

Once Nimrit feels better, Bigg Boss advises her to find a person or a friend to whom she can cry to.

Nimrit feels better and thanks Bigg Boss, while Bigg Boss tells her that the show has always been a house to them and the housemates, are a family.

Nimrit goes to her friends and cries to them while venting out her emotions.

On the other hand, Tina tries to clarify Sumbul's loyalty while Sumbul apologizes to her and hugs her.

Tina goes from there a little emotional while Shaliln goes after her.

Later, Shalin confronts Sumbul and argues with her for changing from the way she was when she entered earlier.

On the other hand, Priyanka, Ankit, and Gautam talk about Shalin's manipulative ways and how he wants to string along both Sumbul and Tina.

© Copyright tellybest.com, 2022, 2023. All Rights Reserved. Unauthorized use and/or duplication of any material from tellybest.com without written permission is strictly prohibited.
Cached Saved on: Monday 21st of November 2022 12:44:25 AMCached Disp on: Saturday 10th of December 2022 02:47:35 PM