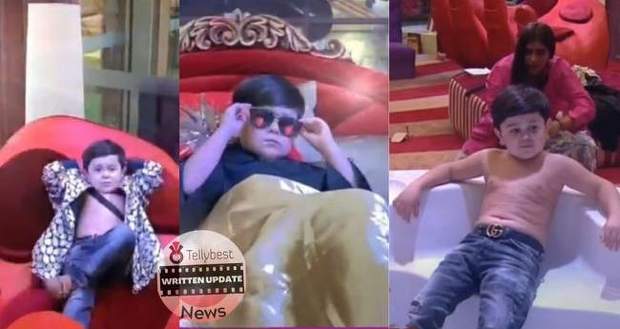 Today's Bigg Boss 16 13th October 2022 episode (Day 13) starts with all the contestants waking up and going to the garden to do the Bigg Boss Oath.

Further, all the contestants sit and have breakfast while Archana tries to steal the ingredients by stating that they are hers after she put them in her bag.

However, her plan fails as Gautam Vig stops her.

Later, Soundarya Sharma gives a massage to Abdu Rozik and he smiles happily while Shalin Bhanot comes there and tries to tease Gautam.

However, Gautam turns the tables by going to Tina Datta and telling her 'what's up baby?'

Shalin gets jealous and as an act of revenge kisses Soundarya on the cheek which shocks everyone.

Later, Soundarya tries to comfort and talk to Gautam but he tells her that he does not want to talk to her.

The easygoing smile on Soundarya's face falls as she leaves from there and goes back to her room.

Shalin comes in front of Gautam to confront him and tells him to state that he likes Soundarya.

Gautam tells him that everyone in the house knows about his affection for Soundarya and tells him to not call him a bro anymore.

On the other hand, Soundarya tries to get support from Gori Nagori who absolutely agrees with her.

At the same time, Sreejita De argues with Gautam and tells him that Soundarya is liking the attention she is getting from Shalin.

Afterward, Sumbul Touqueer requests Gautam to give the kitchen duty to two more people as she cannot handle doing everything alone.

However, Archana again barges into the discussion uninvited and argues with Gautam stating that he is not distributing the duties properly.

Later, Bigg Boss invites Ankit Gupta into the confession room and praises him by saying that he is playing how Bigg Boss used to play for the past seasons, silent and observing.

As per Ankit's observations, Sumbul is naive, Tina is playing with her brain, Tina and Shalin's love angle is fake, and finally, Gautam and Soundarya's liking and affection seems genuine.

At last, Bigg Boss asks what one thing Ankit doesn't like about one particular thing and Ankit reveals how he didn't like when Sumbul and Tina turned to accuse Sajid Khan when the contestants were arguing about Shalin of breaking the rule.

Bigg Boss agrees with Ankit and tells him that he is going in the right direction.

During lunch, Archana steals ginger from other rooms, and Nimrit Kaur Ahluwalia and Priyanka Choudhary speak up about it to Gautam.

Gautam manages to talk it out with Archana and gets back the ginger with the promise that he will get her more ginger when the next ration comes.

Later, Bigg Boss tells Abdu to call everyone into the living room and he cutely tells everyone that BB is calling for them.

Bigg Boss tells the contestants to name one person and say their name after 'Shut Up!' whom they think is the most irritating.

Most of the contestants take Archana's name but she doesn't take it seriously and keeps laughing.

Bigg Boss tells Archana that she will have to stay mute until further notice from Bigg Boss and states 'Shut Up! Archana!'.

Further, Bigg Boss calls Archana into the confession room and asks her if she wants to speak with a special condition and she agrees immediately.

As a result, Bigg Boss calls Shalin too into the confession room and asks him if he is willing to become Archana's voice in exchange for some chicken.

Shalin gets shocked and tells Bigg Boss it is torture on his part but he agrees.

Further, Bigg Boss tells Shalin to wear the cap with a parrot toy stuck to it which makes Archana roll on the floor with laughter.

Archana argues that she is not getting any prize but Bigg Boss informs her that she will get something too if she keeps silent.

Coming out of the confession room, Shalin tells the contestants about the arrangement and they all start trying to get Archana to speak.

On the other hand, Soundarya talks to Nimrit about her feelings for both Shalin and Gautam and asks her for advice.

Later, Nimrit tries to throw water on Archana to get her to speak but Archana puts her mic in front of her face stopping Nimrit.

Tina also makes fun of Archana's Silbatta while Archana silently plans to make Tina's chutney after she is done being silenced.

Bigg Boss 16 then announces that Shalin & Archana are successful in their task, gifting Shalin frozen chicken while Archana gets 1 kg of ginger.

Archana does a happy dance and swirls the basket of her 'adrak' in front of Soundarya intentionally.

Afterward, Gautam tries to clear his mind and asks Shalin about his encounter with Soundarya & who kissed whom first.

Later, Shalin and Gautam hug it out over Soundarya's topic while Abdu blows lots of goodnight kisses to the loyal BB16 viewers.

© Copyright tellybest.com, 2022, 2023. All Rights Reserved. Unauthorized use and/or duplication of any material from tellybest.com without written permission is strictly prohibited.
Cached Saved on: Monday 21st of November 2022 06:31:52 AMCached Disp on: Saturday 10th of December 2022 01:50:41 PM