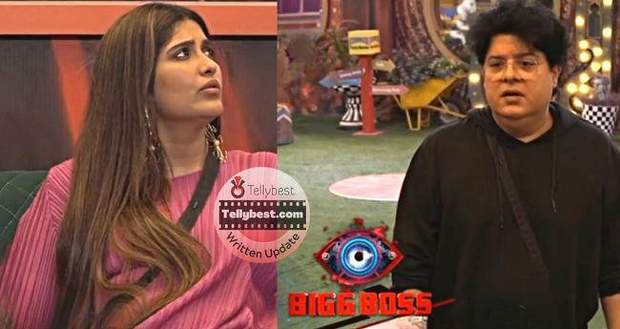 Sajid Khan is upset with Nimmi

Nimrit asks him why he's angry and Sajid reveals that he is upset he was bombarded when he supported Ankit Gupta and no one is speaking anything when Nimrit was saved by Soundarya Sharma.

Sajid says that he has gone into fourth gear while Nimrit gets emotional and starts tearing up.

Sajid tells her that it was never about their friendship while saying that only two gears are left before he bursts.

On the other hand, Shalin Bhanot argues with Tina Datta and asks her when he has not been loyal to her in their friendship while she tells him to not speak in that tone with her.

Tina boasts about her friendship with her ex-boyfriend while retorting that she does even have the guts to say on television whether he is her boyfriend or not.

Meanwhile, Abdu Rozik complains to Sajid that he does not translate for him in games while Sajid argues that Abdu understands Hindi and is fooling the contestants.

Later, Sajid birches about Nimrit to MC Stan and Shiv Thakare while telling them that he does not want them to go to her and gossip about what he said about her.

The next day starts with all the contestants waking up and going to the garden area as their daily routine of singing the BB Anthem has come back instead of the Zumba class.

Further, Shalin sits with Vikkas Manaktala and jokes about the Mandali being run by kids.

Vikas tells Shalin to talk with respect and leaves while Tina and Shalin again argue.

Meanwhile, captain Tina, Soundarya, and Sumbul Touqeer talk about distributing the kitchen tasks as the female contestants refuse to cook without extra help.

Soundarya tells the other two that they should not be revengeful and help them while Sumbul and Tina talk about her behind her back.

Abdu argues that his breakfast is not made while Archana Gautam goes to Priyanka Choudhary and tells her she needs to make different food for Abdu too.

Later, Archana and Priyanka get into an argument while Priyanka argues that Archana also cannot do anything without help.

Archana tells her to not bark too much while Ankit advises Priyanka to leave from there.

Archana says that girls like Priyanka leave people hungry while Priyanka states that Archana adds extra salt into the food of people she doesn't like.

Archana shouts that she fixes girls like her while Priyanka and Ankit both start arguing with her.

Meanwhile, Stan brings out a chair in the garden and enjoys the entertainment as Archana shouts that Priyanka is a Pagal Kutta (crazy dog).

Archana cries while Priyanka tells her to not do her drama and cry her alligator tears.

Sreejita tries to calm Archana while Nimrit and Sumbul talk about Priyanka being insensitive and cold.

Nimrit says that Priyanka makes Archana the villain by sticking to one particular word and that is the reason why Priyanka is selfish.

Captains are not on board

Elsewhere, Vikkas tries to talk to Tina while Soundarya interrupts their conversation which Tina doesn't like.

Later, Tina tries to talk to Soundarya about her problem of not listening to other people but Soundarya again doesn't listen to her.

Afterward, Bigg Boss signals an announcement and Soundarya again presses the buzzer getting the special privilege.

Ration of the week

For the ration task, there are five Thelas arranged in the garden area sorted by rooms including one Thela of the Captains which will be Soundarya's only with Sumbul and Tina's stuff being in the room of two.

In each round, one Thela will be looted by the housemates and they will have to put the stolen ration in their bags which they cannot remove until the end of the task.

Soundarya will be the one deciding which Thela will be looted in each round.

As the task starts, the contestants refuse to move after the first round which leads to Bigg Boss taking all of their rations looted from the first round.

Patch up with Archana Gautam

Sajid argues that the task is not fair to Abdu and gives a carton of eggs to him while Ankit and Priyanka argue about it and make Abdu give back the carton.

At the end of the task, Bigg Boss asks Abdu if he enjoyed participating in the task and he agrees.

Bigg Boss says that this proves that the task was not unfair to him and tells the housemates to not exchange the ration.

Sajid and Stan later tell Abdu that they were talking about him while Vikas tells Abdu to keep his own mindset and not get influenced by other people.

Meanwhile, Priyanka tries to patch up with Archana who tells her that should know Archana does not like arguments about kitchen matters.