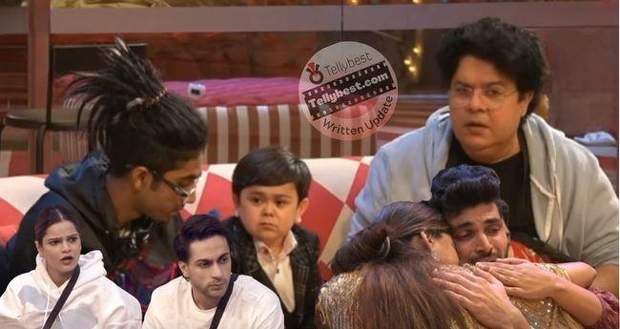 Today's Bigg Boss 16 14th January 2023 episode (day 106) starts with Salman Khan greeting the audience and telling them that the house has become an 11-member house.

He states that there will be another big twist and tells the audience to come and greet the housemates with him.

Salman tells Sumbul to SPEAK UP!

Shiv Thakare and Sajid Khan joke while Salman asks her how she felt.

Sumbul says that she felt appreciated by her uncle as he gave her compliments.

Salman retorts asking her why she never felt appreciated by the Mandali inside and answers himself that it is because she hasn't changed even a bit since the start.

Salman tells her that she has insulted both her father and her uncle by disregarding their advice.

He tells Sumbul to speak up while she states that she did not want to say it because Sajid pulls her leg all the time and she thinks of it as friendly only.

Sajid tells Sumbul that she should tell him if she feels bad as it creates distance between them.

Nimrit is an EVIL DAUGHTER?

Further, Salman turns to Nimrit Kaur Ahluwalia and tells her that she lost control of her emotions in front of her father even after meeting him after a hundred days.

A clip of Nimrit telling her father to not badger her and at least compliment her once after meeting him is shown.

Salman tells her that her father was there and he does not need to compliment her since there is love in a parent's badgering too.

Nimrit explains that she can be a ten-year-old only in front of her father and knows that he was telling her the right thing but was not liking it that he kept talking about the same thing.

Salman explains to Nimrit that her father was only giving her advice and tells her to run as fast as she can in the last lap.

Further, Salman tells her that she was ready to give up even her own trophy for Shiv.

Salman asks Priyanka Chahar Choudhary why Nimrit was in the LOST CATEGORY in the last task and Priyanka argues that it is because other people of the Mandali have their own personalities which are shown.

Priyanka states that Sajid plays mind games and Shiv is the voice of the group while Sajid takes offense and argues with Priyanka.

At the same time, Shalin Bhanot tells Sumbul that she should show gratitude since he is the only one who has complimented her from the start.

The guests greet the housemates and Sandip goes straight to questioning Shalin as to why he is playing the love game with Tina Datta and if he couldn't find anything else.

Shalin tries to justify himself while Tina argues that she is the one who justified their relationship and cleared out any loose strings.

Dibang states that they both look very fake and turns to Salman asking him if he ever had a friendship like Shalin and Tina.

Salman straightforwardly states that he is happy with his life and that his business is his own business.

Tina gets called out for being image-conscious!

Dibang tells Tina that she is image-conscious about saying I love you to anyone on television and asks her if she has a plan B now that the love angle with Shalin is over.

Tina says that she does not have any plans and has always played with her heart while Dibang ignores her and asks Priyanka what is Tina's plan B.

Priyanka answers that she tried to explain to Tina to play her own game while Sandip asks her if Shalin and Tina's relationship is her Plan B after Ankit Gupta's exit.

Priyanka refuses while Salman advises her to focus on herself.

Further, Dibang compliments MC Stan and asks him who he thinks is trying to be nice to him because of his fan base.

MC Stan speaks up and takes Archana Gautam's name while she speaks up for herself.

Dibang bashes her, telling her that she has no qualities of a politician while Sandip also tells her that she needs to respect others to gain respect.

Further, Salman khan tells the housemates to give their honest answers and tells them to reveal who is zero without whom.

Shiv states that Soundarya Sharma is nothing without Archana since she uses Archana to play in the backfoot.

Further, Archana states that MC Stan is nothing without Shiv while dubbing that she wanted to write fans instead of Shiv.

She further starts talking gibberish about fans while Sandip sits her down telling her that it is good for her own self.

Shalin, Tina, and Priyanka state that Soundarya is nothing without Archana.

The task ends and the guests bid goodbye to the housemates as the screen goes blank.

Priyanka explains to Archana what she talked wrong about while Shalin tells Tina that they should part ways completely since he knows what she talked about him the whole three episodes.

Elsewhere, Salman greets Simmi Garewal and tells the viewers that he will be going to do a rendezvous with her asking him questions.

Simmi greets him happily as she reveals that crores of people have asked her when she is going to bring Salman Khan for a rendezvous episode.

Simmi asks him why he is very good at hosting the shows and Salman says that it must be because he has a lot of experience that he uses to guide the contestants.

Simmi agrees as she tells him that she found the contestants very nice and was fascinated to learn that the housemates do not have even a sense of time.

Further, Simmi asks Salman what it would take for him to become a contestant and Salman reveals that it will be nothing.

Salman says that he has never thought about doing BB as a contestant but if he would take it, he thinks he would be able to adapt.

She asks Salman which three friends he would take inside the BB house if he had the chance and Salman takes the names of Sanju, Shah Rukh Khan, and Karishma Kapoor.

Simmi laughs saying that she was expecting him to take Katrina Kaif's name.

Further, they bid each other goodbye and part ways.

Salman reminds the audience about the big announcement.

Bigg Boss tells the housemates it would have been the finale had the show not got extended which is why Abdu Rozik has to exit the show because of his prior commitments.

Abdu acts as if he didn't know it while Bigg Boss reveals that it is the first time in the 16 seasons that a contestant is taking a voluntary exit.

Bigg Boss tells Abdu that it is the end of his wonderful journey inside the Bigg Boss house and tells him to bid the housemates goodbye.

Abdu hugs the housemate's goodbye while telling them that they all are playing very well.

All the housemates get emotional while Sajid says that he felt Abdu's distance from the morning.

Shiv starts sobbing hysterically as he tells the Mandali that Abdu had told him the previous night.

Sajid acts a little offensive and asks Shiv why he didn't tell them at that time.

Sajid goes to the garden while Stan, Shiv, Nimrit, and Sumbul hug Abdu.

At night, Archana cries feeling upset about what Dibang told her about not being a good politician while Soundarya, Tina, and Nimrit comfort her.

At night, Soundarya tries to advise Archana but the conversation ends up in an argument with Archana taunting her and telling her that she gets into problems because she is real while others wear a mask of being perfect.