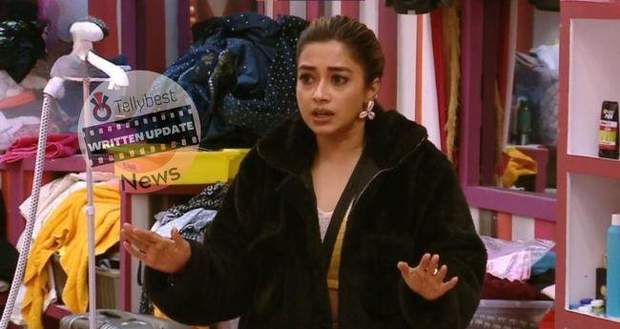 Today's Bigg Boss 16 14th November 2022 episode (day 45) starts with all the housemates waking up to the sirens and going to the garden area for the daily assembly.

All the contestants try to wake up fully as they sing the BB Anthem.

Meanwhile, Shalin, Tina, Shiv Thakare, and MC Stan keep joking about Priyanka and Archana by calling them Dusht and Paapi.

Archana comes outside and starts arguing for the sugar while Priyanka joins in along with the others.

Shiv and Stan mock them and say that they are overreacting.

Soundarya Sharma starts arguing with Shalin who was joking that he will give his whole ration and she demands to give all his ration.

Tina and Soundarya mock each other!

Gautam Vig stands up for Soundarya and starts arguing with Shalin by calling him fake.

Soundarya starts a vocal war with Tina for talking about her follower count.

Tina replies back with another taunt about Soundarya putting on kilos of makeup and still not getting a rank in the MyGlamm.

Soundarya fights for Gautam, gets shouted at by him instead!

Later, Soundarya again gets into an argument with Nimrit Kaur Ahluwalia and Sumbul Touqeer Khan while Gautam tries to stop her.

Soundarya tells him to not interrupt while he says that the topic is regarding his breakfast.

Bigg Boss tells Sajid Khan to not talk while sitting in the smoking room while Priyanka starts laughing.

Shalin comes forward and starts arguing with Priyanka while Ankit tries to stop her.

However, Priyanka tells Ankit to not tell her and continues arguing with Shalin.

Later, Bigg Boss calls all the contestants into the living room while Shalin comes out of the shower only in a towel.

Bigg Boss praises him and tells him that after reconsidering, the ban on him from being able to participate in the captaincy tasks has been lifted.

Further, Bigg Boss informs the housemates that for today's captaincy task in which Sajid will be the tour guide.

At the buzzer of the first round, all the contestants will turn into statues while Sajid will select two participants to become the tourists.

In the end, the two tourists will decide together and take three names of the contestants whom they want to remove from the captaincy race.

Nimrit and Shiv's group start convincing Sajid to not save Ankit Gupta in exchange for him getting the opportunity to become the captain.

In the first round, Sajid makes Shalin and Nimrit the tourists as he gives them a tour of all the contestants with his humorous drama.

In the end, Nimrit and Shalin remove Gautam, Priyanka, and Soundarya.

Bigg Boss announces their names and Ankit tries to comfort Priyanka by telling her that they will take the captaincy by winning.

For the second round, Sajid takes Sumbul and Tina as tourists.

The new captain of the house is...Sajid Khan!

Meanwhile, Archana gets into an argument with Priyanka and Soundarya while she tells them that she will do whatever she wants to do.

Further, Stan, Shiv, and Abdu plan to out Shalin, Tina, and Nimrit in the next round.

For the third round, Sajid chooses Abdu and Stan who go as per their plan and remove Shalin, Tina, and Sumbul.

On the other hand, Soundarya tells Priyanka that Nimrit is the most unhygienic housemate and will tell her the reason later when she is not wearing the mic.

Sajid chooses Ankit and Shiv for the last round while Soundarya and Priyanka decide who will become the captain between Shiv and Sajid.

Meanwhile, Shiv and Ankit remove Stan, Nimrit, and Shiv from the captaincy race.

At the end of the task, Bigg Boss announces that Sajid is the new captain of the house, and Shiv and Shalin lift him up to take him to the captain's house.

Archana tells Sajid that he should have played fair while Nimrit and Stan argue that Sajid called for the people that he trusted.

Bigg Boss calls all the contestants into the activity room and tells them that he is bringing a new twist into the house.

Bigg Boss reveals that the house will follow the monarchy and the captain will be the king/queen while the king's favorites will stay in the room of 2.

The favorites will be safe from elimination while the royal cooks will stay in the room of three. They will cook only for the king/queen, the favorites, and for the people in a room of four.

The peasants will stay in the room of six who will have to do all the work of the house and will also not have the privilege to nominate the people for elimination.

Tina gets upset with Sajid's decision to keep Sumbul in the room of three and not consider her or Shalin.

Nimrit and others promise Shalin that they will consider saving Tina first if she goes into elimination.

Further, Shalin goes to Tina and tells her that he knows Sajid plays unusually sometimes and shocks everyone.

Tina says that Sajid is a flipper and she is going to do the same from now on.