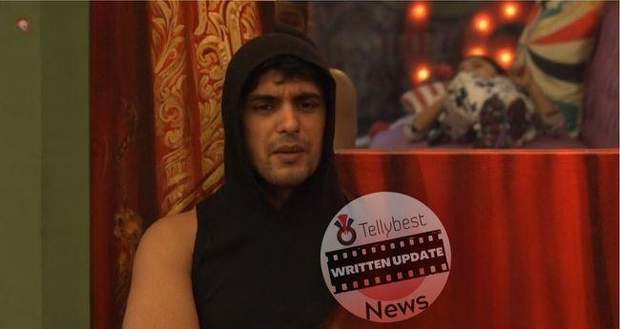 The Bigg Boss 16 contestants get pleasantly surprised by the song played and remember that Salman Khan might visit them today on Shukravar Ka Vaar.

Gori Nagori gives the juice of "Shaatir Shikanji" to Sreejita who gives Gori the same drink.

Archana gives "Laalchee Lauki" juice to Soundarya, calling her arrogant, and mimicking her walk. Archana also mentions that Soundarya is "Paltu Pyaaz" as she only gets closer to people who become the captain.

Everyone laughs at the mention of Soundarya & Gautam Vig's budding relationship while Soundarya gives "Khadoos Kadoo" juice to Archana and calls her "rotten" who is "laalchee" or greedy for gingers.

Mc Stan calls Shalin to drink the "Paltu Pyaaz" juice and calls him arrogant as well.

Nimrit calls Priyanka, handing her the "Kadvi Jabaan" juice, and takes a jab at her for interfering in everyone's matters.

Shiv calls Shalin as his argument is the same as Stan, and labels Shalin "paltu".

Sajid calls Abdu to drink the juice while Sumbul Touqeer takes a personal jibe at Gori who drinks the bitter juice sportingly in the task.

Priyanka calls Nimrit and says she gets personal herself and gives her the "Paltu Pyaaz" & "Shaatir Shikanji" drinks.

Salman Khan appreciates Priyanka & Nimrit's feud that is out in the open which is the way real ladies fight.

Salman Khan gets shocked at Shalin calling Soundarya to drink the "Kadvi Jabaan" juice and states Shalin was the only one smooching and giving a kiss on her face yesterday.

Afterward, Ankit openly asks Soundarya who she wants to be with - Shalin or Gautam.

Later, Sajid Khan gets a task from Salman Khan himself to steal some things along with Abdu.

Ankit sees this and protects Abdu when he goes into the bathroom to get Gautam's shoes.

Sajid gets another task to hide Abdu in the activity area and convince BB16 contestants that Abdu has gone missing.

Sajid walks with Shiv Thakare to the luggage room and acts as if he is looking for him.

However, Abdu is not in the luggage room and Sajid collects all the contestants to tell them that Abdu is nowhere to be found.

Further, Salman teases him stating that Nimrit is the most worried about him, and says that it is time for them to go back inside the house.

The housemates greet Salman who says that not only Abdu but many other things are missing which is all because of Sajid.

The contestants get surprised when Salman tells Archana Gautam that she is loved by India which makes her happy.

Afterward, Salman also praises Ankit for speaking more this week and tells him to speak as it is creating a good image for him.

Further, Jallad brings up the things that Sajid had stolen and tells the contestants that they will get their things back if they can guess which contestant has gossiped the said thing about him.

Sumbul gets hurt by Tina's comment about her relationship with Shalin

Going towards more serious questions, Salman asks Priyanka if someone gossiped that Ankit's mother will slit her throat and cry blood if Priyanka becomes her daughter-in-law.

Ankit asks Soundarya if she has any manners

Soundarya tries to justify herself by saying that she had said it in a lighter tone but Priyanka and Ankit refuse her justification.

Hardy reveals that he is a big fan of MC Stan and MC does a freestyle rap for him.

Further, Shalin dances with Parineeti while Tina tells Sumbul to not think that she was gossiping as she was just discussing with Shalin.

Later, Parineeti and Hardy give the contestants a task and tells them that Hardy will guess what their heart is saying by touching their veins.

The contestants have fun with the task after which Parineeti tells the contestants to guess whom she is singing for in code words.

Abdu becomes the Jigar Da Tukda (a piece of their heart) and everyone agrees wholeheartedly.

Archana says that Soundarya makes her 'Pareshaan' (stressed) while Soundarya laughs it off.

Salman tells the contestant that he will bid the guests goodbye and will meet them in the living room later.

Later, Priyanka cries after arguing with Soundarya while Sajid tells her to be strong.

Meanwhile, Sumbul tells Tina and Shalin that she is hurt by Tina's words while they both try to comfort her.

The argument between Soundarya and Priyanka keeps getting bigger while the other contestants also start getting involved.

Priyanka runs to her room and cries while Ankit goes comforts her.

On the other hand, Soundarya states that she was just joking and Priyanka should not have felt bad.

Later, Sumbul gets emotional seeing her father on the screen while he tells her that he sent her to Bigg Boss 16 to toughen her up.

Sumbul's father stirs the conversation towards Shalin and asks him how he can humiliate and destroy Sumbul when she thinks of him as her elder brother.

Finally, Sumbul's father tells her that he hopes to see her take decisions herself.

Sumbul gets emotional as her father sings another poem for her.

Salman tells Sumbul is by herself only for whatever happens while Shalin tries to talk but is stopped by Salman.

Sumbul's father bids them goodbye and leaves while Salman tells them that tomorrow's episode will be more intense.

© Copyright tellybest.com, 2022, 2023. All Rights Reserved. Unauthorized use and/or duplication of any material from tellybest.com without written permission is strictly prohibited.
Cached Saved on: Monday 21st of November 2022 01:50:40 AMCached Disp on: Thursday 1st of December 2022 02:18:49 AM