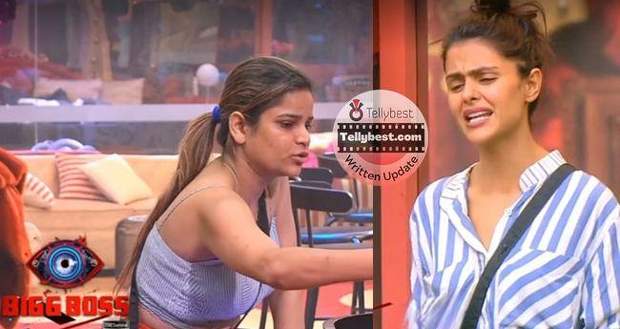 Today's Bigg Boss 16 15th December 2022 episode (day 76) starts with all the housemates waking up to the siren as they rush to the garden and sing the BB Anthem.

Afterward, Shiv Thakare and MC Stan sit Abdu Rozik down and tell him that Nimrit Kaur Ahluwalia has a boyfriend outside.

Archana and Priyanka END their friendship?

Meanwhile, in the kitchen, Archana Gautam argues with Priyanka Chhar Choudhary and tells her that she is making cuts from other contestants' dough to make parantha for herself and Ankit Gupta.

Priyanka takes the issue to heart as she starts crying and tells everyone that Archana always argues with her every time she is in the kitchen while Ankit and Soundarya Sharma try to calm her.

Later, Priyanka talks in front of Archana to Shalin and tells him to give her a packet of bread.

However, Archana goes to Shalin and tells him that she will not make his chicken if he gives any ration to Priyanka.

Tina gets the SPECIAL PRIVILAGE!

Afterward, Bigg Boss makes an announcement and Tina Datta manages to press the buzzer getting the special privilege.

In the task, the contestants will be divided into two teams of Black (Shiv, Shalin Bhanot, Nimirt, Archana, Tina, and Priyanka) and White (Sumbul Touqeer, Soundarya, Sajid Khan, Ankit, MC Stan, Abdu) while Sreejita De and Vikkas Manaktala will be the coordinators of the task.

The teams will have to make BB Gold by sticking the BB sticker onto the gold biscuits and the team with more biscuits at the end of the round will get to send one contestant to the magical library in the activity room.

Sajid chooses Soundarya over his family!

In the first round, Team White wins and Sajid gets selected to go into the magical library.

Sajid takes the captaincy chance for Soundarya as promised and comes outside.

The black team wins the second round and Nimrit goes into the magical library.

Archana argues that she wants to go and that it is not fair.

Nimrit gets strength from her parent's letter

Nimrit takes the letter and exits the activity room while Bigg Boss informs Archana that she is out of the captaincy task since Nimrit chose the family letter.

Archana says that she does not mind while Soundarya hugs Sajid realizing that he chose her captaincy over letters from his family.

Ankit goes in the third round while Nimrit and Shiv argue with Sajid saying that Ankit will not be loyal to them.

However, Sajid argues that Ankit promised to choose captaincy if anyone from his team comes.

Meanwhile, Ankit stays loyal and chooses captaincy for Abdu against his own wish to read the letter from his family.

In the fourth round, the black team wins and they take Shalin's name while Archana argues that she wants to go.

Priyanka tells Archana to stop her fake tears and get out of her self-obsession while others try to convince Archana by saying that Shalin wants to read the letter from his family.

Once inside the magical room, Shalin gets a little emotional as he says that he cannot see anything other than the letter from his family.

Shalin lets go of Shiv's captaincy as he reads the letter from his father and cannot stop the flow of tears as he feels the familial love with him in the form of the letter.

Shalin reveals that he was feeling a little lonely after Tina's change in behavior and thanks Bigg Boss by saying that he needed it.

Shalin thanks all those who helped him while Archana tells Sreejita that she will not keep her friendship with Priyanka as she never supported her when she needed her.

Bigg Boss tells all the housemates to stand in a line in the garden and announces that the task ends and now Tina has the privilege to choose either Sreejita or Vikas for the captaincy in the next week.

Tina obviously chooses Vikkas as she has a feud with Sreejita.

Later, Sajid sits down with Abdu and again tells him that Nimrit has a boyfriend and that he cannot propose to her while Nimrit also comes there and sits down.

Sajid gets angry at Nimrit and asks her why she didn't tell Abdu that she had a boyfriend which makes her upset.

Sajid makes himself the villain while Nimrit tells him that she does not blame him and is only crying cause she feels targeted by him.

Sajid reasons that he is just taking this situation as a daily routine and is taking it ruthlessly so that it doesn't hurt either Nimrit or Abdu.

© Copyright tellybest.com, 2022, 2023. All Rights Reserved. Unauthorized use and/or duplication of any material from tellybest.com without written permission is strictly prohibited.
Cached Saved on: Wednesday 25th of January 2023 01:55:36 PMCached Disp on: Sunday 5th of February 2023 04:01:14 AM