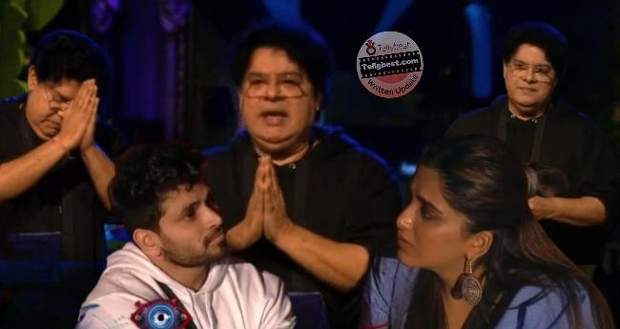 Today's Bigg Boss 16 15th January 2023 episode (day 107) starts with Tina Datta getting surprised to see Sajid Khan awake and asking him if he was able to sleep or not.

Sajid says that he could not sleep as he continued to miss Abdu Rozik and they talk about Abdu.

Further, the siren rings throughout the house, and all the contestants go to the garden to sing the BB Anthem.

Nimrit Kaur Ahluwalia talks to Tina Datta about her friendship with the Mandali while Tina tells her to sing.

Meanwhile, Sajid and Soundarya Sharma try to explain to Archana Gautam where she was wrong in talking to Dibang the previous day.

At the same time, Tina uses Priyanka Chahar Choudary as a messenger to talk to Shalin Bhanot.

Is Shalin Bhanot the New Captain?

Archana starts talking nicely to everyone while Nimrit tells Soundarya that she should not talk in favor of Archana anymore as she is being portrayed as wrong.

Later, Shalin sits with Priyanka and tells her that he wants to become the captain this time.

He further tells her that they should manipulate the weak-minded people of the Mandali and try to break it like he saw Sajid manipulating Soundarya.

Archana and Soundarya sit together and talk about Shalin and Tina's game for the viewers while Priyanka sits with Shalin and tells him that she thinks he wants to talk to Tina.

However, Shalin says that he does not and tells Priyanka that he is only focused on the captaincy.

Later, Shekhar comes once again but in a new tapori avatar while calling the housemates by their tapori names.

Shekhar jokes that Farah Khan left not only with three brothers but a lot of things she stole from the Bigg Boss house.

Further, Shekhar jokes with everyone while stating why he would take them in his gang and bids them goodbye afterward.

Soundarya restores her friendship with Priyanka

Nimrit further talks to Soundarya about Archana while Soundarya goes to Priyanka to sort out their friendship.

Shalin shaves his beard and jokes with Nimrit while Tina squeals about it, and run away from them.

At night, Nimrit tells Archana to not misinterpret her father's words and tries to explain to her that he was just telling them to be civil with each other.

The next morning, Archana gets dressed in Indian wear due to it being Uttarayan while MC Stan, Priyanka, and Tina make fun of it saying that she is just doing it for attention.

On the other hand, Nimrit tells Sajid that the show has been particularly hard for her due to her mental health journey.

MC Stan jokes about Archana and tells Nimrit and Priyanka that he is not low like Archana to make issues out of little things.

Afterward, Shiv and Shalin have to compete against each other by cooking for Tina, Priyanka, and Archana for the title of the best chef.

In the end, Shiv wins by majority while Soundarya tells Shalin to stay away from Tina as she sees them talking to each other through signs.

Soundarya tells this to Archana and Nimrit while specifically telling Nimrit that Tina is trying to get close to Shiv.

Nimrit tells this to Shiv and tells her that he's being a pillow.

Later, Shiv and Tina dance together while Sajid, Nimrit, and others joke about it.

Afterward, everyone is talking when the house suddenly starts flashing red lights, and many people come inside in vests and bearing guns.

Riteish Deshmukh's voice is heard as he tells Sajid that his friends are waiting for him to make new films and tells him to come outside.

Nimrit and Sumbul Touqeer Khan run to the garden and tells the housemates that there are pictures of Sajid everywhere.

Bigg Boss tells the housemates to sit in their designated seats while talking about Sajid's journey with himself where he isolated himself from his fans and the whole world for four years.

Sajid goes through his journey!

Bigg Boss talks about how Sajid has a battle with himself and how he had decided to get loved by his fans once again and entered the Bigg Boss House.

Finally, Bigg Boss talks about Sajid's journey with his housemates and reveals that Sajid is being let go because of a work opportunity that has come to him after four years.

Sajid tells the housemates that he was hesitant to enter the house but is glad that he did since he gained such good friends and apologizes for hurting his friends by not telling them earlier.

Further, the lights turn back on and the housemates start hugging him while Shiv Thakare, MC Stan, Nimrit, and Sumbul get emotional.

Shalin tells them to spend some time with his Mandali while the four members continuously tell Sajid that he will miss them.

They assure Sajid that they will take care of Sumbul while Stan gets upset with him for not telling prior.

Sajid tells them that they should be happy since he is getting a work opportunity.

Later, Sajid bids goodbye to the housemates while keeping a happy face.

Before leaving, Sajid tells Shiv to handle everyone.

Nimrit gets angry at some of the housemates for fake cries while Shiv consoles Stan and Sumbul.

Meanwhile, the rest of the housemates feel that the house has become empty without Sajid.

Soundarya goes to the Mandali and tells them that she is upset seeing a kind of calmness wash over Tina and Shalin's faces after Sajid's departure.

Nimrit tells her that she is angry since she feels like the rest of the housemates are waiting to burn her house (Mandali).

Shalin tries to become the elderly of the house while Nimrit tells him to not make fun of Sajid.

Meanwhile, Sumbul tries to better Stan's mood by having a group hug.

At night, Nimrit is in the kitchen when she tells Sumbul that Shalin is trying to talk to her again and warns her to not speak to him again.

Further, Soundarya and Archana bond and are talking about their friendship while Shiv and the Mandali talk about it.

On the other hand, Shalin talks to Priyanka and tells her that this is a good chance for them to break the Mandali since the remaining contestants do not know how to stay united.

© Copyright tellybest.com, 2022, 2023. All Rights Reserved. Unauthorized use and/or duplication of any material from tellybest.com without written permission is strictly prohibited.
Cached Saved on: Wednesday 25th of January 2023 12:35:25 PMCached Disp on: Sunday 5th of February 2023 03:05:47 AM