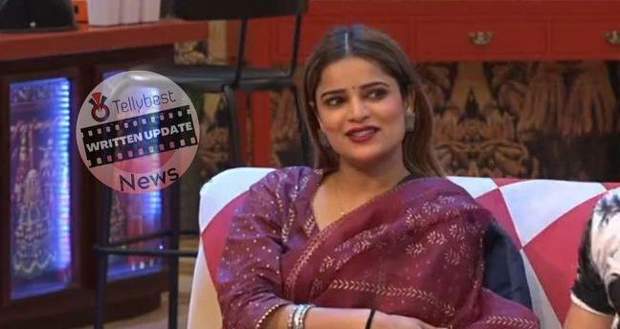 BB16 Day 45 starts with all the housemates singing the BB Anthem and hugging each other first thing in the morning.

However, Archana Gautam starts fighting with Shiv Thakare and Sajid Khan over breakfast saying that she is not going to make what Sajid (Raja Ji) wants.

BB16 House gangs up on Archana!

Priyanka Choudhary supports Archana while Sajid tells MC Stan that both Archana and Priyanka are over from his side.

Again during lunch, Nimrit Kaur Ahluwalia refuses to talk to Archana and asks Sajid what she should do.

Sajid tells Nimrit to take the flour for the chapatis from the room as it's his order.

Meanwhile, Priyanka and Ankit give flour for one chapati each to return the matter.

Shiv tries to create drama as he tells all the ladies that Sajid is going to give them jewels and pearls if he gets impressed by their performance.

Later, Shalin Bhanot goes to Tina and tells her that her actions of Masti (Fun) are looking vulgar in front of the camera.

Tina tells him that she does not need his suggestions as she is a responsible adult and knows how to act.

However, Shalin tells her that she is a child compared to her.

At the same time, Archu argues with Priyanka saying that she is helping her and will not make the chapatis fully.

Priyanka and Archana break their friendship!

The argument gets intense when Archu comments on Priyanka's parents which makes Priyanka blast.

Archu starts saying that 'Mein _____ se Baat nahi karti' (I do not talk to ____) while Priyanka tells her to fill in the blanks.

At the same time, Shalin tries to tease Tina while she tells him to not do that as this might be looking vulgar like he had said.

Archana starts talking ill about Priyanka and comments on how her future in-laws would feel which makes her the target.

All the friends start supporting Priyanka while Archana says that she will not become their agent.

On the other hand, Shalin is telling his observation to the rest of the group saying that Priyanka has become Archana 2.0 while Soundarya Sharma has taken on the role of Priyanka 2.0

Later, Bigg Boss calls the housemates into the garden and informs them that it is time for the elimination task.

However, at the end of each round, the sound of the wolf will come and the nominated contestants will have to decide among themselves to send one contestant who will choose whose sheep to feed to the wolf and remove them from the race.

Meanwhile, Nimrit tells her group that they should nominate Shalin and Tina after which they start convincing Archana that she should break Ankit's.

Shalin tries to convince Tina by telling her that she should feed Gautam's sheep while she says that she wants to remove Ankit from the game.

Soundarya goes first and feeds Tina's sheep to the wolf making her nominated for elimination.

Shalin tries to convince them to let him go second while Gautam and Soundarya say that it will be Archana going second as decided.

Priyanka lets Shalin go in the second round by fighting with Soundrya and Archana.

Shalin removes Gautam from the game and nominates him.

In the third round, Priyanka tells Archana that she does not trust her and goes to feed Shalin's sheep to the wolf and nominates him.

Tina goes in the fourth round and removes Soundarya from the task.

Archana gets saved from elimination!

Just then, Bigg Boss announces that the task is over and Ankit, Priyanka, and Archana are safe from elimination while Soundarya, Gautam, Shalin, and Tina are nominated for elimination.

At night, Shalin and Tina sit with Shiv's group and are discussing how they were betrayed while Soundarya, Gautam, and Archana argue with Priyanka for letting Shalin and Tina go.

Archana goes to Nimrit's group and tells them that Priyanka and Ankit are cowards while revealing that she felt indebted to them.

However, Nimrit explains to Archana that she is not indebted to her.

At night, Shalin and Tina sit with Sajid and tell him that they want to stay out of each other's game as they do not want to be mentioned together.

Sajid, Shalin, and Ankit are sitting with Sumbul and talking about hypothetical situations while Bigg Boss calls Shalin into the confession room.

Shalin goes inside the confession room and gets shocked to see chicken dishes while Bigg Boss tells him to share his opinions.

Bigg Boss tells him that he can take the rest of the food as a birthday gift.

Later, all the contestants celebrate Shalin and Sumbul's birthday by throwing them into the pool while Gautam refuses to wish Shalin.

At night, Tina reveals to Shalin that she feels demotivated to play the show anymore while he tries to comfort her by giving her encouraging words.

On the other hand, Nimrit and Shiv sit together and discuss seeing Shalin and Priyanka as best friends in the future of the show to benefit from each other.

Elsewhere, Sumbul shows the bracelet that Shalin has given her as a birthday gift.

© Copyright tellybest.com, 2022, 2023. All Rights Reserved. Unauthorized use and/or duplication of any material from tellybest.com without written permission is strictly prohibited.
Cached Saved on: Monday 21st of November 2022 12:51:46 AMCached Disp on: Sunday 4th of December 2022 11:24:26 PM