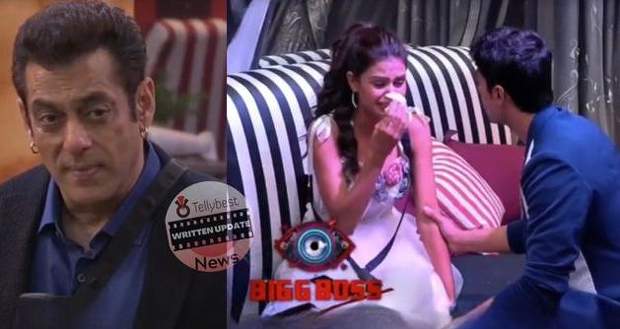 Today's Bigg Boss 16 15th October 2022 episode (Day 15) starts with Salman Khan greeting the audience and telling them that they will uncover the truth by using Saam, Daam, Dand, and Bhed.

Inside the house, Shalin Bhanot acts upset and guilt-trips Sumbul Touqueer into apologizing to him for how her father humiliated him.

Shalin tells Sumbul that he cannot afford to look even more wrong than he already is looking.

Tina Datta also comes there saying that she feels upset since she didn't do anything wrong and still she is being projected wrongly.

Sumbul tells them that they should stay away from her since they are being projected badly because of her.

Shalin angrily talks about his son and declares to Sumbul that he does not want his son to watch the show when he gets older and feels that his father makes fun of girls.

On the other hand, Soundarya Sharma keeps apologizing to Ankit Gupta and Priyanka Choudhary for saying what she said.

Tina calms Sumbul while arguing and asks how Gautam Vig became great when they were the ones who kept thinking worriedly for Sumbul.

Later, Shalin goes to the other housemates and complains while they all explain to him that it was Tina who had fed everyone those rumors and gossip.

However, Tina keeps arguing that it was others who were gossiping about Sumbul and she was just getting concerned for Sumbul.

Further, Salman greets the housemates and seeing Sumbul crying, says that it is what happens every day.

He asks Sumbul how she is understanding everything while she puts her head down stating she is not able to understand anything.

Salman sympathizes with her saying that they are not doing this for TRPs but only for her.

Sajid Khan says that he thinks Sumbul is getting emotional as she is still young and can't handle herself isolated from her family and living with strangers.

Sumbul says that she stayed with her brother alone and agrees that she didn't understand everything even then but hopes to slowly move on from this and get on the right track.

To lighten up the atmosphere, Salman jokes about Archana Gautam's dialogue and further tells the contestants to share whom they think is wiser between Priyanka and Nimrit Kaur Ahluwalia.

Priyanka gets almost the double votes of Nimrit which doesn't surprise anyone except for Nimrit herself.

Salman praises her and gives her a star badge as an award while Nimrit eyes it with despair.

The guest greets the contestants and makes Shalin and Tina dance as friends after which they request Priyanka and Ankit to dance to their song Manke.

All the housemates join them along with Salman and the guests creating a lively atmosphere.

Siddharth further tells Abdu and Sajid that they have heard him requesting Pizza and "Burgir" and tells them that they can get that for a donation of ten food items.

Salman also tells MC Stan that they have a voice message for him from someone and tells him to donate his jewelry.

MC thinks about his fiance and agrees to donate the jewelry while Salman tells him that he has another task for him and tells him to give the necklaces with the tags 'Asli', 'Nakli', 'Phuski', and 'Vat' to the contestants he deems fit.

Further, the actress dances with Salman before the guests make their exit.

Afterward, Salman asks the housemates who they think deserves punishment and Shalin gets the most votes with Nimrit following after him.

Shalin gets punished by Salman Khan

Salman makes Shalin sit on the punishment chair while Shalin argues that he will make sure he does not make Sumbul's father think wrongly as he understands him as a father.

However, Salman starts removing his jacket as he tells Shalin to do not to disturb him now that he is speaking.

Salman talks about Shalin's attitude as to how he degraded Sumbul's father and disrespected him.

Salman also reveals how the doctor who came to check up on Shalin was insulted by Shalin and how he misbehaved with the doctor.

Shalin looks down in embarrassment while Salman asks Shalin to repeat the exact words that he told the doctor.

Shalin stays silent while Salman shows the clip where Shalin disrespectfully asks the doctor what he studied and tells him that he is not qualified enough to treat him.

Shalin tries to justify himself by saying that he has a neurological problem and was not in his right mind at that time.

Finally, Salman tells him to keep his excuses to himself and asks him whom they should talk to now, him or his lawyers.

The screen goes black while Archana starts judging Sumbul for sitting with Shalin even after her father told her such things.

Meanwhile, Salman welcomes the Chello Show actor Bhavin Rabari on stage and greets him in Gujarati.

Afterward, Salman greets the contestants once again and tells them that Sreejita De is the one who got eliminated.

The housemates bid her goodbye.

Later at night, Shalin and Tina again manipulate Sumbul and tell her to forget everything that happened today.

Elsewhere, Nimrit and other housemates also talk about how Shalin and Tina are making Sumbul feel like it's her fault in everything.

On the other hand, Tina tries to guilt trip Gautam by telling him that he should have supported her and Shalin in front of Salman sir.

© Copyright tellybest.com, 2022, 2023. All Rights Reserved. Unauthorized use and/or duplication of any material from tellybest.com without written permission is strictly prohibited.
Cached Saved on: Monday 21st of November 2022 08:23:01 AMCached Disp on: Monday 5th of December 2022 01:01:32 AM